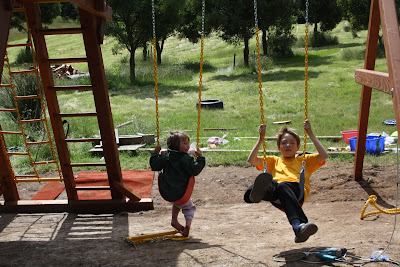 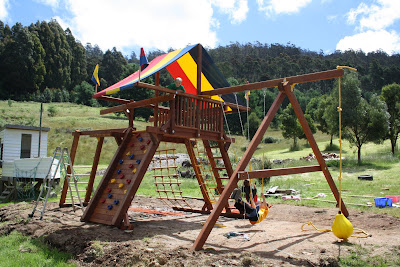 A break in the rain. Not much of one, by the looks of things, but enough.
I took Chrissy the Medical Student to the airport early this morning. It was a bit sad. Chrissie has been coming here on a John Flynn scholarship for two or three weeks a year over the last three years, and she's been a good friend. She's angling for another visit late next year, so it's not quite as sad as it could be, but it was still a little downbeat.
Especially after last night. Natalie told me that Chrissie and Linda and Steve the Bike Guy were coming by in the evening, and asked me to make an 'impressive dessert'. With some nice bubbly wine.
That just never happens. Natalie's all health-conscious. I make the occasional dessert, but they're for visitors or the kids. Natalie never asks for a dessert. Conscious of the gravity of the occasion, I decided to go for it.
For the base, I made some nice, light shortbread rounds. Then I painted them with a layer of chocolate ganache. Next, I created a light, fluffy mango mousse and chilled it, and finally, I made a watermelon and mint sorbet.
The final product was plated with the shortbread rounds on the bottom, then a couple scoops of mango mousse, and a decent scoop of watermelon/mint sorbet to the side as a cleanser. I have to say it was pretty damned good -- but I do think the ganache was a little too powerful for the mango mousse. I should have used white chocolate, I think.
Anyway, we ate our extravagant desserts and drank good wine, and it was a very nice evening indeed. So getting up at 0600 to do the airport run was all the less entertaining.
Once I got back, Nat and I got into Moby Playset. Luckily, a friend showed up to help, because getting that floggin' great beam and A-frame into place was an utter bastard of a job. Really. Not at all pleasant. And of course, what with the instructions being so peachy clear and understandable, we had to pull half of it down again and invert it before we could set it up properly. Bastard bastard bastard bastard bastard.
The monkey bars on the opposite side were even worse. The horizontal bars are anchored to the angled ladder/support by two metal plates cased in yellow vinyl. The plates are drilled in three locations, and the big, fat, heavy beams for the monkey bars and their supports are also pre-drilled. This means you absolutely must assemble that bit before you can plonk the end of the horizontal bars onto the deck of the playset itself. And THAT means by the time you're trying to position those big, fat, heavy beams precisely in place so you can drive the stupid bolts through the friggin' yellow vinyl/steel plates, you're handling a lot of heavy, clumsy weight.
For a long time.
I'm quite sore now. At one point, I stood in position maintaining the precise matching of the necessary boltholes for a full half hour. I wasn't taking the full weight of the system, of course, but enough of it to count as an effort - and if I'd screwed up, it would have dropped on me and done me something of a mischief.
It wasn't a bastard of a job, no. In fact if I were to apply the adjectives I'd like, I'd have to resort to terms that would make Oedipus himself hide his face in shame.
I'd rather not have to do that again. Any of you bastards out there get the urge to build a playset for your kids and you want help -- I'm busy that day. Guarantee it.
It's up now. Even the bells and whistles are in place now. A little trapeze goes on one side of the monkey bars tomorrow, and a couple of hand-holds and safety grips here and there; another rope that runs up the rock wall/climbing face.
But that's it.
Sheeit.
Posted by Flinthart at 9:39 PM