This One's For You, Angela! 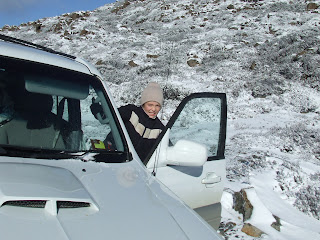 Elder Son trying to remember how his face is supposed to work... 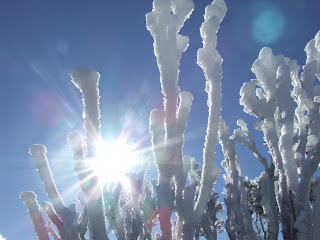 Snowbound plants in the morning sun. 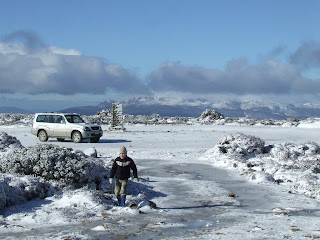 Elder Son, the car, the mountaintop - and in the distance, Mighty Ben Lomond, Tasmania's internationally reknowned ski field. (Okay. We have one slope.) 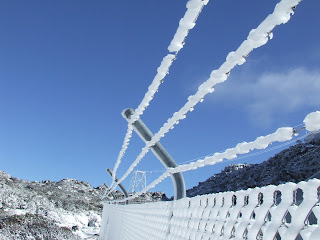 Barbed wire, thick with ice -- television facility atop the mountain. 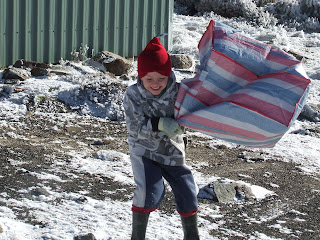 There was snow on the mountaintop on Wednesday, the day after I got home. I decided to take the boys, and we brought a couple of young neighbours with us too. It was Extremely Fuckin' Cold once we got up there... no brass monkeys for many a mile. Photo above depicts the Younger Son, struggling with a cheap but hard-wearing laundry bag which we used as a flexible sled. It worked quite well, when it wasn't flapping around in the 40-60kph winds!

The title of the post speaks to the Scarlet Angel herself, who found it necessary to use portions of my neck to rescue her fingers from frostbite one balmy afternoon in Adelaide not long ago. The fingers were indeed somewhat chilly, but the ambient temperature was perfectly reasonable -- or so I said at the time, and so I maintain. Adelaide isn't cold.

Cold is that bloody mountaintop. I checked the news yesterday. Apparently, while we were up there around midday, the local temperature was -5C. And if you factor that bastard wind into the whole situation, I'd say it's perfectly understandable that we were only up there for an hour or so. Took me a couple of hours before I could feel my face again!
Posted by Flinthart at 8:57 PM 7 comments: