Anyone Got Designs For An Ark? 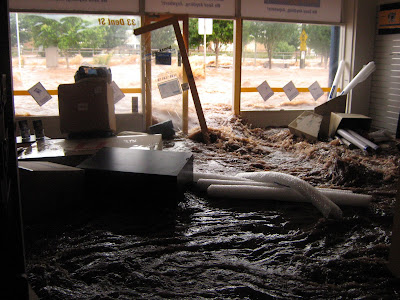 The image above isn't mine. It was taken by my brother-in-law. It's the interior of the business that he and my sister run in Toowoomba, on the day of the now-infamous flash flood. My young nephew was in there too.
They survived, though they had to climb on top of the counters to avoid the rapid rise of the waters. My sister is fine too, though it will be quite a while before things are straightened out down where they live in Brisbane.
The picture is up here -- with permission -- as a reminder. That wall of water rose in nothing flat, and caught people completely by surprise. Toowoomba is a wreck, large chunks of the Lockyer valley are in trouble, and there's a hell of a clean-up to come in Brisbane.
If you haven't already found a way to offer a bit of help to Queensland, now's a good time to think about it. The kids and I did a big gather-up here in the house -- six big, sturdy bags full of clothes, toys, books, and house-hold items: serviceable things which can be sold on by the Salvation Army, or even directly contributed to people who are looking to rebuild lives.
There are many ways to donate. The Queensland Premier's Flood Appeal can accept donations directly from this website, for example. But don't forget that in such a sweeping disaster, it's more than just money. A register of volunteers for the cleanup is already in place - but even simple things like donations of non-perishable foodstuffs and basic household materials can be useful.
Meanwhile: if you've read about floods in Tasmania, don't worry about us. We're well set, and well stocked, and floods down here never last more than a few hours. Besides, the worst was over on the East Coast, where a couple roads have been cut.
Of course it never rains but it pours, as the saying goes. So it's raining here - not too hard, but with a maniacal, relentless quality. I won't be too surprised if it turns out that by tomorrow we've seen 200mm or more here. And that's a bit problematic, what with Natalie still on the mainland, planning to fly home this afternoon.
And naturally, it's been pissing down over where she is, near Kyneton in Victoria, on the music camp. I found out today they've been sandbagging in anticipation of rising rivers... she says the roads are clear and she can get to the airport. I hope so. The kids are looking forward to seeing her, and I'll be glad to stop doing the sole parent thing after the better part of a week.
That last, of course, would be why you've not heard a lot from me. Trapped indoors with three small kids for the last five days or so. We played a six hour game of Arkham Horror yesterday, defeating Yig the dreaded Serpent God with style. Today I've sent 'em up to the shed to play Wii games. Hopefully that'll keep 'em entertained until we have to go to the airport...
...wherever you are, whoever you may be: stay safe, and consider how good your life has been to you. Things could be a lot worse.
Posted by Flinthart at 7:09 PM 3 comments: