There Is Madness Afoot 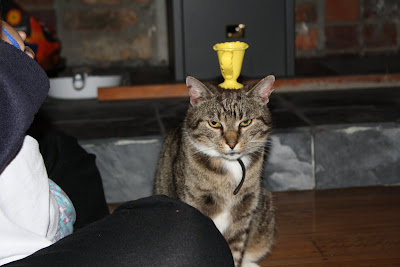 This is my esteemed cat Toxo. There is a small plastic cup balanced on his head. There are those who say that cats don't really have facial expressions. My cat disagrees with them almost as much as he disagreed with that plastic cup. Balancing things on cats heads is madness. 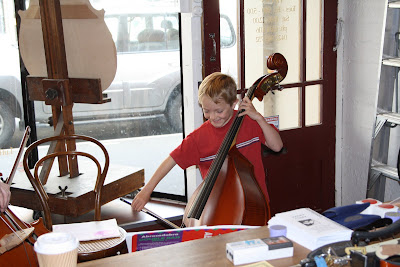 This is a photo of Younger Son. That isn't a cello. That's a 1/8th size double bass. This occurred because he completed his second violin exam and got a High Distinction. But he does not enjoy the violin. He enjoys the double bass. Very much.
He is quite small, being only seven years (nearly eight, I admit.) He's also small for his age. The double bass, on the other hand, is the single largest frikkin' instrument in the orchestra (if you exclude the piano, the calliope, and the Mad Scientist Pipe Organ - which last he would surely covet if he thought he could get close to one.) Nevertheless, he stuck out his time with the violin for two years in order to be able to pick an instrument he truly wanted to play... and he made us stick to our end of the bargain too.
So now, Smaller Son has a double bass. This is, of course, madness.
This particular bit of madness was at its best this morning. The Mau-Mau has her piano lesson today, so I had to pack the electronic keyboard and stand into the car. But the Younger Son desperately wanted to show his new instrument to his class, and his schoolteacher has given permission... so I had to pack the double bass in the car. Ah, but young Jake is planning to play 'Three Kings Of Orient' for the school assembly on Friday, and first had to audition for the school principal. So I had to pack the cello in the car this morning too.
Mini-piano. Double bass (one-eighth size). Cello.
Hello? Any other members of the farkin' orchestra want a lift? I can still see over the dashboard a little... we can probably fit a couple of tubas in here if we try!
Madness. 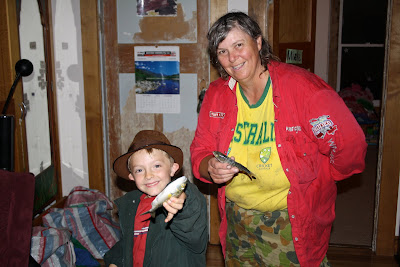 Here's Younger Son again, and a friend. He went fishing on Saturday, after the little string-student concert in our house. (The string teacher is a friend of ours. She needed a venue. More madness.) In Younger Son's proudly outstretched left hand is his first-ever wild-caught fish. It is, I am given to understand, a 'Cocky Salmon'.
He ate it, fried, for lunch the next day. With a very nice tomato chutney and some fresh bread. The smaller of the two cocky salmon was offered to the cat. Then to the other cat. Then to the dog. Then, in desperation, to the pet rats. Last I heard, the chickens were getting the opportunity to reject it too.
But Younger Son enjoyed his.
Madness. 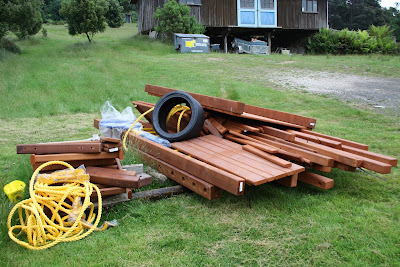 That pile there? More madness. That's roughly 800kg of timber and plastic and metal. You can't really judge the size in this photo, but that's okay: you're going to see more photos in weeks to come. As I put it all together. Because this is the playground setup which is to replace the Legendary Lost Blackwood tree.
It is fucknormous. There are six respectable-size boxes of nuts, bolts and screws. There are bags of climbing-wall handholds. There's a periscope. Binoculars. A sunsail.
And then there's me, and my box of spanners.
Madness. Purest goddam madness.
Posted by Flinthart at 6:07 PM 7 comments: