Here are some photos. It took me a hella long time to get them into this stupid blog. You'd better appreciate them... 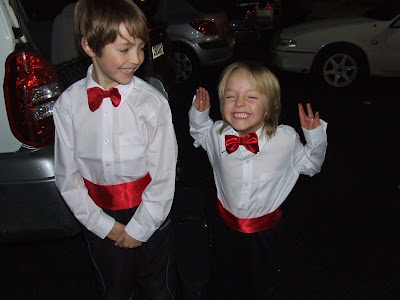 Here's the lads, immediately before the Great Orchestra Debacle (otherwise known as The Mau-Mau's Symphony in Ass Flat Minor) As you can see, the dignity and seriousness of the event have deeply affected Younger Son.
Anyway. This is meant to be mostly about the weekend that just passed. Yes, I know it's Wednesday. Monday was a pupil-free day at school, so we had Elder Son's long-awaited ninth birthday party. And yesterday? Oh, shit, I was good for nothing yesterday. Not a damned thing.
Here's a quick vision of the major hassle of the weekend: 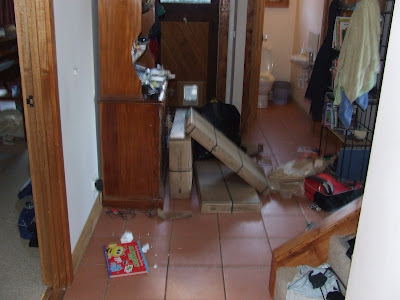 Wish I'd thought to take photos of the initial goddam mountain of flatpacks. This is just a tiny, tiny fraction, although you can see the crawling chaos beginning to spread... 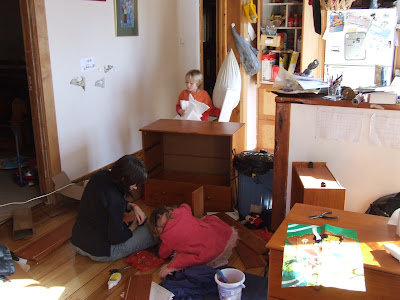 A disaster zone of cardboard, polystyrene, bits of timber, stray tools, children, cats, glue, and laundry. How did we get so far behind on the laundry? 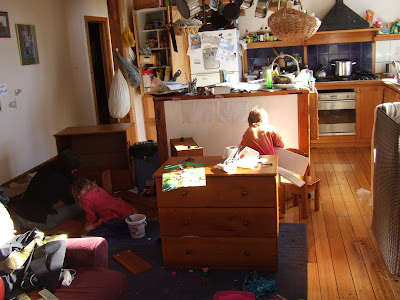 More from Planet Flatpack... the Mau-Mau helps Natalie with a chest of drawers, while Younger Son stuffs YET MORE F___KING POLYSTYRENE into a garbage bag. You will note that Flatpack Hell has pretty much consumed the living space...
Sunday Afternoon was the first Kid's Party Event. Natalie being on call, I got the short straw. Naturally. 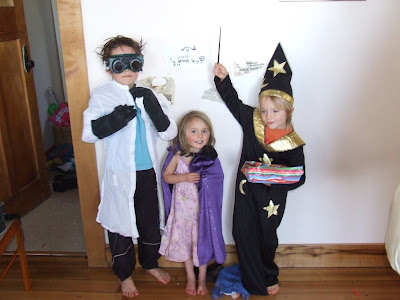 Naturally, the Saturday Kid's party was Fancy Dress. From right to left -- Elder Son is The Mad Scientist. He has gelled "crazy hair", a pair of welding goggles (the groovy flip-up kind), black vinyl gloves and an old white shirt belonging to his mother.
The Mau-Mau is wearing one of her favourite pink dresses, and an old cloak. She announced she was the Nightcrawler Wizard, but I believe that later morphed into some kind of princess. And of course, Younger Son was delighted when we found an old Wizard costume his brother had outgrown. That's a chopstick serving as a magic wand, there...
The party was mayhem. There were more than twenty kids, and it was brutally cold outside. Fortunately, Saturday Kid's Mum was organized -- she had 'em playing games in the rumpus room for an hour and a half. Then it was picnic food, sausages, lollies, and finally, The Birthday Cake and Awaaaaayyyyyy... 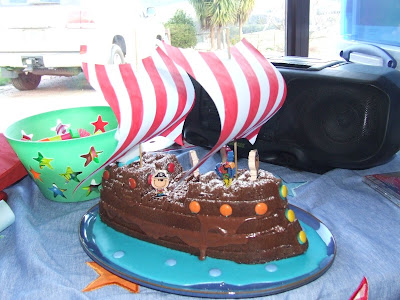 That's the birthday cake at the Saturday Kid Party. You see what I have to compete with? Poor Elder Son only got a plain chocolate mud cake... Good thing I planned a Tardis Pinata, eh?
Aaand back on Planet Flatpack... 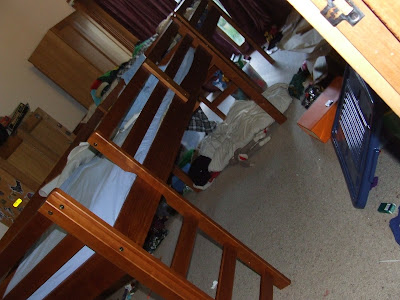 For a wonder Natalie didn't get called out too often, and she plugged away at Flatpack Hell. Here's the boys' room with two assembled beds. No shelves, chests of drawers or cupboards in place yet, but getting there.
The final count? I did two beds, a two desks and a chest of drawers, but I also did the extra kid's party, and the prep for the 4th July party, plus extra kid-wrangling. Natalie did a bed, two chests of drawers, a desk and three bookshelves, and did a grand reduction of toys and clothes and crap.
I don't think either of us did a lot of sleeping. 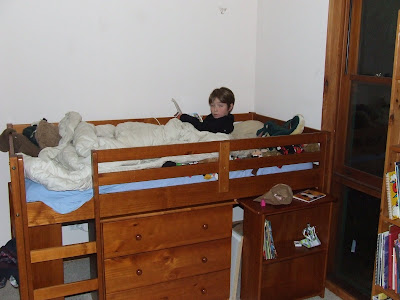 Elder Son was pretty happy to climb into the newly assembled outcome of Flatpack Hell. It elicited approval from the cats, too -- they can jump up to mattress level, and being cats, they quite like having a bit of height to look down from.
Elder Son's official Doctor Who birthday party was really pretty much the last gasp... Nat and I spent the whole morning frantically racing around cleaning up the remnants of Flatpack Hell, distributing furnishings, collecting laundry, cleaning, prepping birthday cakes and party bags, and organising games, etc. Goddam nightmare. Somehow, by mid-day, we were ready to go.
Parenting Tip: to anybody with a little bit of space -- the Single Greatest Party Game Ever is without doubt the Scavenger Hunt. The list I handed to the two teams included a hazelnut, a walnut, a slater, a rubber tyre, something made of plastic, a feather, a piece of ripe fruit, and sundry other obscurities. It took 'em twenty whole glorious minutes of racing around outside, charging from location to location, shouting to each other, heaving at tyres, arguing over bugs (we got two millipedes and an earthworm before anybody actually managed to get a slater!). It was goddam fantastic -- a dozen kids outside, desperately engrossed, while exhausted parents got twenty minutes to themselves. Score! 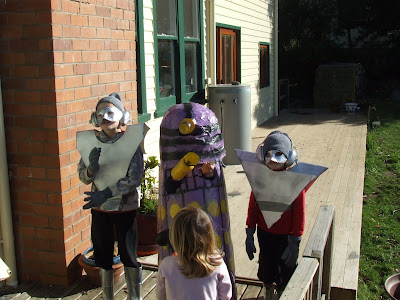 Two Cybermen and a Dalek demonstrating what an "Axis of Evil" really looks like. Cop that, George Dubya! 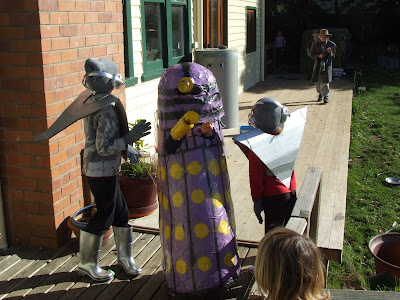 "Oh, hey -- look at that bloke with the hat and the scarf and the coat... should we be doing something about him?"
The Doctor even came with jelly-babies. The cyberman is about to accept a peace overture... 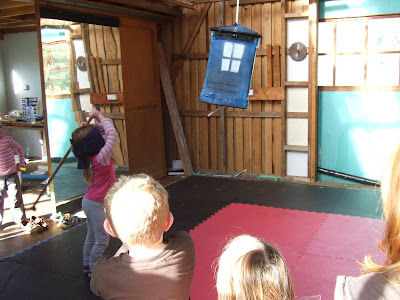 "Doctor! The Tardis is under attack by some kind of gigantic blindfolded alien with a stick!"
"Not to worry, Rose. The idiot who built this pinata made it so goddam tough that there's no way any kid is going to get through with a stick."
Which was correct. The Tardis was built out of cardboard -- wonder where I got that from? -- and gaffer tape, and by Gallifrey it stood up to some serious thwacking. They annihilated two cheap walking-sticks in the process, and in the end, we had to lower the Tardis so they could jump on it, mob it, and disembowel it en masse.... it was spooky. 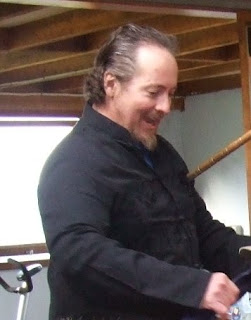 Yours truly, "The Master". (I took off my black gloves to deal with the Great Tardis Pinata)
Posted by Flinthart at 4:42 PM 10 comments: