Not As Easy As It Looks

I told ya there'd be more photos, didn't I?
The weather cleared up. Yesterday's gorgeous, misty, cool weather went away, replaced by Tasmanian early summer sunshine. Gaudy, green, golden. This place is just shatteringly clear and lovely the day after the rain.
Today, however, I couldn't revel in the loveliness of it all. For today I had a rendezvous with... The Play Fort. 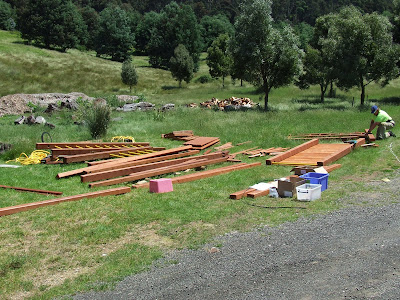 There it is, all spread out on the ground In bits and pieces. Would it surprise anyone here if I said that the fifty-eight page assembly instructions were pure shite? No? I didn't think so. And indeed, they were shite. My work-buddy and I spent the first hour trying to figure out which of our pieces which looked NOTHING AT ALL LIKE THE PIECES IN THE STOOPID DIAGRAMS could be fit together in a fashion resembling the product.
In the end, after a few terse phone calls from Natalie, she confirmed that the thing is supposed to be a King Kong III Playhouse With Bells And Whistles. (Great forkin' name, eh?) That gave me the chance to look it up on the 'net, and print off a few photos of what it's supposed to look like. And yes, the photos were a FUCKLOAD more helpful than those diagrams.
The problem is that these Rainbow play thingies are modular, and they give you one set of instructions that's supposed to be adaptable to a dozen or so different outcomes. Except the instructions illustrate only the basic model, so you have to try and guess which of your upmarket pieces replace which of the generic pieces in the diagram.
And once you've guessed -- successfully or otherwise -- the second surprise lunges out at you. Drilling holes.
This giant pile of timber you can see -- it's got more goddam holes in it already than a leprous cheesegrater. It's more or less an enormous pine colander. And yet despite this amazing array of holes, in order to get various bits to fit together and bolt into position, you actually have to drill still MORE holes in the forkin' thing. And of course, all the goddam bolts and the required drillbits are measured in Ancient Babylonian units, as opposed to simple metric - so after an hour of cursing, swearing, separating, classifying, and lining up, we had to do a run to the hardware store to get a bunch of idiot-measure drillbits that I didn't have. GrrrRAAAHHHHHHH! 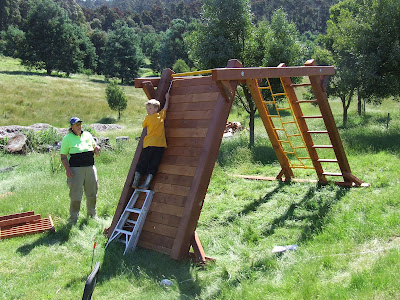 Not to worry. I am, after all, some kind of genius - and my work-buddy there is certifiable, so between us, we managed to make some kind of connection between the Internet photo and the chicken-scratching diagrammes of the assembly instructions. Holes were drilled. Things were bolted onto other things.
And then I had to lift the goddam frame into the shape you see, an arch. You bolt these things together flat on the ground, you see. Then you raise the centre span, put the corner-braces in, and tighten the major bolts, and it's solid.
Raising the end of the arch that connects to the steps and the stairs was no problem. I pulled it up to my chest height, adjusted my stance, raised it, and the braces were placed and drilled. No worries. But that other end - the one with the solid wood panel... whoa.
Every time I lifted it, the damned thing would slip back on the wet grass. Eventually, I got my work partner to brace it by ramming a pry-bar into the ground against it every time I managed to slither it up a few more centimetres. But then it got to that terrible middle point, just above the bellybutton, where you can't really pull up any more, but you can't quite switch your grip around to get under it and push.
I worked it out. I spun around until my back was to the wood slab, got my hips under it, and drove up with my legs. Then when it was braced with the pry-bar, I bent my knees again, wiggled a little farther under, and lifted again. And it worked - which was a source of considerable satisfaction, since both Natalie and my co-worker were telling me we'd have to wait until the bloke with the Bobcat turned up, tomorrow.
Fuck that. Bobcats are a convenience, not a necessity. 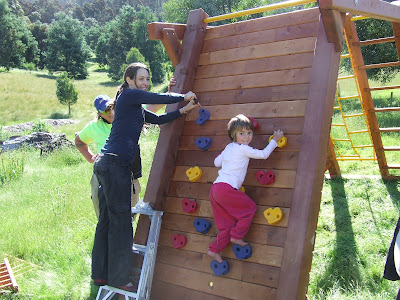 Once the main arch was up, Natalie decided to start tacking on the climby bits. There's a lot more superstructure to go on top, but until Bobcat Bloke levels the final site, I don't want to increase the weight of the structure a whole lot. I wanted to get it to this stage so I can simply plonk it in place on the newly-levelled earth without a lot of fuss. It's going to be damp and slippery enough. Trying to raise and assemble that arch on a bed of slippery clay would have been a real bastard. At least now, the bulk of the work to be done is well off the ground, minimising dirt and mud and slippage... but yeah, moving it into position is going to be entertaining. I'm hoping Bobcat Bloke is built like a brick shithouse. 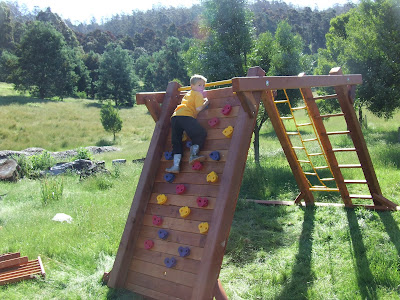 Younger Son took to the climbing wall like a deranged monkey. Note his elegant climbing shoes: gumboots, spray-painted silver sometime around June for part of a birthday party costume. 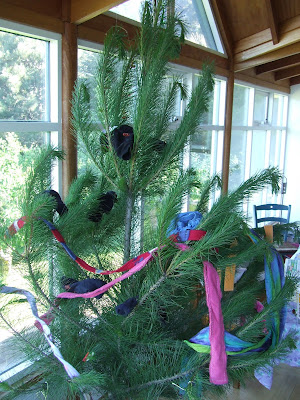 Meanwhile, the Mau-Mau decided she absolutely HAD to decorate the Christmas tree. This is, I suppose, the first year in which the Christmas propaganda machine has really levelled her in its sights. She's at Kinder now, so she's hearing all about Christmas from friends and teachers and so forth - and it's really taken root. For the last month, she's been giddy with excitement over every single piece of crapulous tinsel hanging in every single store we've entered. "Oooh, look, Daddy," she gushes, as we enter the local Woolworths, pointing at a manky plastic-and-tinsel tree standing on a cardboard box, "It's Christmas things! I love Christmas things! Oooh, I can't wait until Christmas!"
Then the next shop: and there she sees a box full of tinsel, waiting to be sold - and we get the exact same lines, with the exact same degree of Oscar-winning enthusiasm, and all the cute-factors turned up to eleven. Okay, yes, I get the goddam message, kid.
Unfortunately, she's going to be slightly disappointed if she's expecting some kind of Christmas bonanza. Neither Natalie nor I has had anything like time, and frankly, with new bicycles and now this terrifying overkill playhouse, the Christmas budget is well and truly blown. I've found the Mau-Mau a nice easel and got her a big artbook of her very own (she adores painting and drawing), and I'll get her a groovy caddy for all her pencils and paints and colours, and we'll find a few silly bits and pieces to fill a stocking -- but this is going to be a low-key, family-oriented goddam Christmas if it goddam well kills me!
Still. You gotta love the decorations on that tree. There are belts from four different bathrobes there, and a silk scarf, and a couple of unfinished papier-mache baubles that Natalie was working on with the kids. When Younger Son saw what was going on, he got into the act too: that's why there are several socks and a couple of brightly coloured pairs of underpants up there.
Of course we'll have to get some tinsel and some sparkly crap for the Mau-Mau's sake. But I think I'm going to leave the underpants as well...
Posted by Flinthart at 1:38 AM No comments: