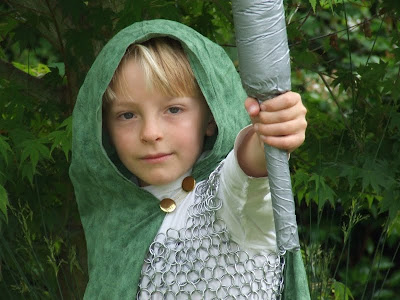 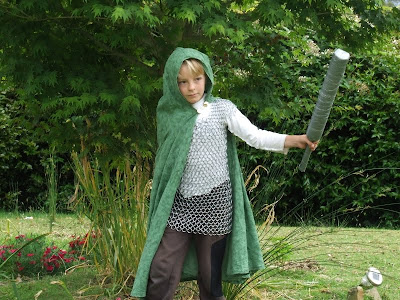 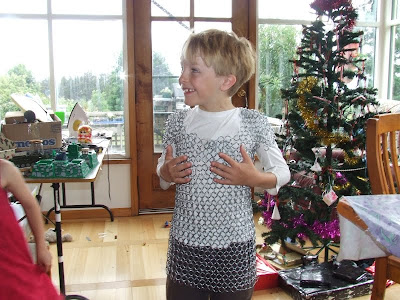 Today is young Genghis' birthday party. It's about a week early, but what do you do when your kid is born on Xmas eve?

He's getting a really cool party this year. He and nine of his friends (including his brother) are off to the new Laser Tag facility in Launceston, for a few hours of running, screaming, jumping, and laser-zapping. I expect massive carnage. I also expect a bunch of very, very tired boys.

Once we're done, we'll head back here for the triple-layer chocolate cake with peppermint marshmallow, and a bit of a backyard barbecue with the firepit and all. In the meantime - well, Genghis got permission to open one birthday present. You can see it in the pictures above.

Obviously, I've been working at it for a while. To my variously Medieval friends: yeah, I know the links are too large, and it's a bit funky around the shoulders. But you know what? That is one deliriously happy not-quite-nine-year-old boy there. And remember that the armourer who put that particular chain shirt together has no prior experience whatsoever.

Hooray for the Internet, eh? I poked around a bunch of websites, and found out how to make basic chainmail. After that, it was all just cutting and bending.

It's a bit scratchy, but the boy loves it. He hasn't taken it off. (Of course, that's going to be challenging. It's a close fit. He'll have to tip himself up and shimmy out of it. I may even remove another couple of links.)