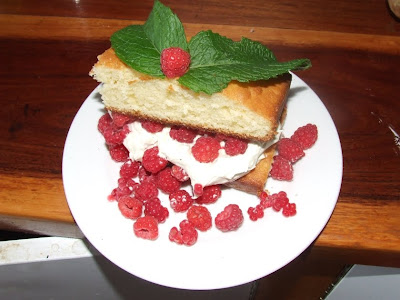 Actually, right now summer tastes like raspberries. The work I did a few years back in putting in the canes is literally coming to fruition. I've given up on neat rows and carefully tied canes: there's a tall, spiny, shadowy bramble of raspberry canes, just right for kids to sidle into and get lost, and scratched, and sweaty - and absolutely loaded with beautiful, fresh, ripe, delicious raspberries.
It's not completely uncontrolled. There's a quarry in Launceston that will sell random slabs of flat rock from their operations. You can get a trailerload for about $30. I've taken a bunch of those rocks and just thrown them into the bramble, making winding, narrow pathways amongst the berry canes.
That'll do. We're sitting on fifty acres. Why the hell should I bother trying to constrain my raspberry bushes? I've got a fence around 'em for the wallabies, and a daggy old net that I'm going to have to replace in the next year or so which deters enough of the birds. We're currently getting about a kilo a day from the patch, and probably will do so for the next week or two. Shortly after that, I expect the first blackberries to kick in.
The kids are ecstatic. Natalie's happy. I'm happy. Raspberries are good. The canes keep coming up, expanding into new territory. Eventually, they'll break out of the fence - and I'll let them. If they can fend for themselves amongst the ravening wallabies and rabbits, then why shouldn't they?
In the meantime, I have raspberries. At supermarket prices, I have something like $40 or $50 per day of raspberries, and they're not mouldy, or over-ripe, or squished, or flavourless from cold storage. Faced with such a bounty, I have a Policy.
Naturally, we're eating a lot of simple, plain, ripe raspberries. Of course. But as a cook, since I have access to such a luxurious ingredient, I feel a real obligation to do the job right. So I'm playing around, and everybody's enjoying the outcome.
The photo at the top is my 'Raspberry Sandwich'. It's a very simple single-layer lemon cake baked in a broad, shallow dish. The cake gets cut into neat squares, and 'sandwiched' around whipped cream and oodles of lovely raspberries. The mint leaves on top are purely and simply because I can. I have an enormous mint bush in a half wine-barrel next to the main path to the door, and the green, fragrant leaves look groovy on top of all that luscious cake, cream and fruit.
That was Thursday. Friday I went to the cricket, and got back late. Yesterday I made an elegant, creamy raspberry mousse, which I served by heaping it with fresh raspberries, then drizzling melted dark chocolate over the lot. (And mint leaves. That really is a goddam big mint bush. Must figure out more things I can do with mint.) We had Malay Chicken Rice first - the whole show, with the bowl of soup full of vegetables, then the fragrant twice-cooked chicken served with rice cooked in the chicken stock.
Then we followed it up with the raspberry mousse, and at that point, five children were convinced I am a God... and my wife is convinced I'm an incarnation of Satan, promoting furious gluttony upon hapless middle-aged women.
Anyhow: I'm looking for more interesting raspberry recipes. Anybody got a favourite of their own?
Posted by Flinthart at 2:06 PM 8 comments: