Six Hours Driving, Five And A Half Hours Of Cricket 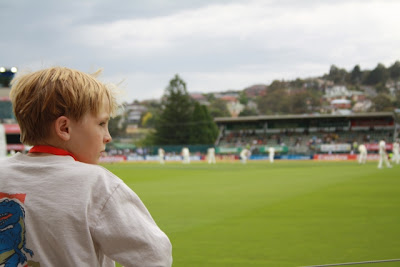 ...and was it worth it? Well - yeah.
We're being pretty low-key about Xmas this year. Frankly, Natalie and I are just tired of it, and the boys are old enough to be taking a more relaxed view of the whole show. The Mau-Mau is still young enough to be excited by the entire prospect, of course... but that kind of excitement can be adequately addressed with decorating Xmas trees and making seasonal treats, and pulling crackers, and so forth.
However, more or less as a result, we're kind of loosening the weave, and incorporating a few treats around Xmas. Not related, but timely, and fun. So when I discovered that the second cricket test between EnnZed and Oz was going to kick off in Hobart today - well, how could I resist? The boys love them some cricket, and I rather like the game too. Especially the test form. And Bellerive Oval is a pretty place that still has a proper Hill for the drunkards and the yobbos to sprawl upon indecorously.
So I dove online, and booked a few tickets. And then one more, because a friend of the boys' at school is also a big cricket fan, and has (like my two) never before been to a live match of any quality.
Hell of a drive, though. We took off at about 0730 this morning, and drove. And drove. And drove. And then we parked the car a few blocks from the Oval, and we walked. And finally, they let us in - although they told us we couldn't take our umbrellas with us. Weapons of terror, apparently. Or something.
Anyway, it was a very good day. The boys were thoroughly delighted. The weather was hot and bright for most of the day, and early in the piece there was a lot of action from the pitch - plenty of bounce and seam, and even a good amount of swing for a couple of the Aussie bowlers. As a result, the Kiwi wickets fell at a gratifyingly steady rate, and the boys got to cheer and jeer, and solicit autographs on the sidelines.
They made noises with freely distributed and sanctioned noisemakers. They gathered horrible little Milo Cricket balloons. They drank Powerade and ate sandwiches and fruit that we'd packed, and listened to the commentary on wee little free ear-radios provided by series sponsors Vodaphone. Whenever they got bored or hot, they'd wander off to another section of the ground, and then wander back when they were ready.
And I enjoyed myself, yes. I do like a bit of cricket, and I got to watch the match, as well as watching three young lads enjoy watching their very first test match, and I felt like a Decent Sort Of Dad, which is always rewarding.
A late rain shower delayed the start of the Australian innings, but they batted just long enough for Warner to hit a decent boundary, for Hughes to lose it to Martin in the slips yet again, and for Usman Khawaja to dodge, duck, weave, and pray his way through to 'not out' by the time the rain set in for real. By that time, we were ready to go anyway, so we packed up, reclaimed our umbrellas from the kindly buffoons in security, and launched ourselves into the traffic.
And may I just say: of all the events I have ever driven away from in cities all over Australia, getting away from Bellerive Oval is by far the most irritating piece of work. Hobart's traffic system was NOT designed for the kind of traffic dump you get at the end of a decent cricket match... and Bellerive is a cramped sort of suburb on a peninsula of sorts. The drive from Bellerive to the edge of the Hobart traffic region took nearly a full hour. I was less than happy.
So, that was the day. Six hours of driving. Lots of music on the radio. A decent day of cricket with a good performance from the Australians, and three very tired, very happy kids.
That's definitely a dose of true Christmas spirit, if you ask me.
Posted by Flinthart at 1:47 AM 4 comments: