Robin Hood In A Flannelette Shirt...

Yeah, I like a bit of archery. Have done for a long time. But I've been stuck with this goddam compound thing, about 30kg+ in draw, with all the pulleys and the hunter-stuff, and frankly, I never really enjoyed it. I like my archery fairly primitive, I guess: a bowstave, a string, an arrow and a target.
Really, I do the arrow-shooting thing in the spirit of kyu-do -- as a form of meditation, to chill out and empty my head. Possibly because I've been doing it longer, I find that sending a few flights downrange is even more relaxing than spending half an hour practising iaido drills.
Anyway, a while back the string on the big compound motherforker got a bit more frayed than I felt comfortable with. You really, really do NOT want one of those bastards explosively de-tensioning next to your ear... or frankly, anywhere within a couple metres of you. There's an awful lot of stored energy in a powerful compound bow.
Logically, I should have got it restrung. But... I've had it ten years, and it was secondhand when I got it, and it really doesn't suit my needs. And on top of that, getting one of those puppies restrung in Tasmania is, apparently, quite a trick. I hear a rumour there may possibly be somebody in Hobart who can do it. But not up this end of the state, apparently.
So I thought: to hell with it. I got down a full jar of change, and when the boys went into gym yesterday, I ducked down to the bank in Launceston, and cashed in all those coins. Then, armed with about $250, I bought myself a nice, simple 15kg draw bow, and a few new arrows to go with it.
"Simple" is probably a minor exaggeration. There are two laminated arms that bolt onto a heavy, laminated centrepiece. But there are no pulleys, and you string it yourself every time you want to use it. And even though there are innumerable mounts for counterweights and sights and balances and shite -- there's no rule that says I have to use 'em.
I got the bow home, and when I could steal a moment, I tried out a couple of the new fibreglass arrows. I've never shot fibreglass before, and I wondered about them. They were thinner than I was used to, and a little shorter, although still nicely within the proper draw-length for my arms.
Well, they flew okay and the bow felt good, so I put it away and got back to kid-wrangling.
Today, though -- today I decided I'd have a 'proper' shot. I built a nice little backstop with some old tyres (a bit of give so stray arrows don't shatter on impact), popped a cardboard box full of cardboard and polystyrene scraps in front, and went back about 20m.
I know. 20m isn't much, really. But I was just getting the feel of the bow, and besides, Natalie wasn't home -- so I pretty much had to expect the boys would want to shoot alongside me. (I bought them a lightweight fibreglass kids/beginner's bow a couple years back. They love it; particularly Younger Son.) 20m is a good distance for them, with that bow.
And it was nice. We took turns, arrow-for-arrow. I offered a few corrections here and there. Younger Son finally found the range, shooting (with his short arms!) up at an angle of about thirty=five degrees, and he was delighted. And I found the target pretty quickly at that distance, so that was okay too.
Then it happened. One of the new fibreglass arrows went through the centerline/top of my improvised cardboard target. It bounced off the tyres behind, but didn't come all the way free of the top flap of the box. Instead, the arrow hung down across the target box from top to bottom, like a centreline.
Naturally, I used it as an aiming guide. I mean, it's not like I was actually gonna hit it or anything. And remember: these are rounded, target-point arrows. And the shafts are goddam fibreglass -- they're very hard, and very smooth. So what do you reckon the odds of THIS happening would be? 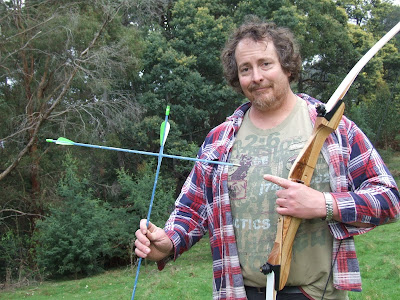 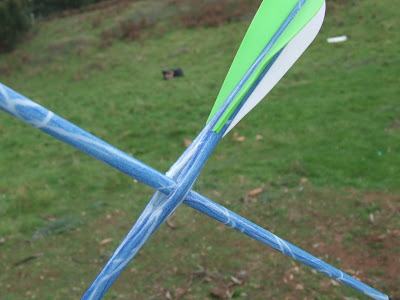 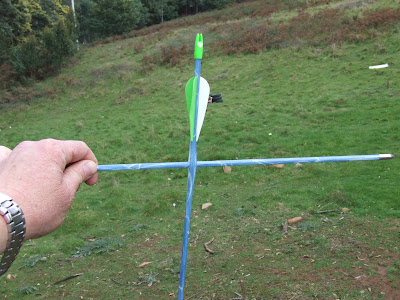 I have to hand it to those little fibreglass arrows, though. Once I pulled the killer arrow out of its victim, the wounded shaft closed up neatly. Out of curiosity, I nocked it and let fly. And what do you know? Bullseye.
I think that as my older arrows gradually die, I'll continue replacing them with the fibreglass variety. They're not particularly expensive, and honestly, they do a hell of a job. It's not very traditional, but who cares? I reckon they'd have been glad of 'em at Crecy or Agincourt -- and Robin Hood wouldn't think twice about it.
Posted by Flinthart at 9:48 PM 17 comments: 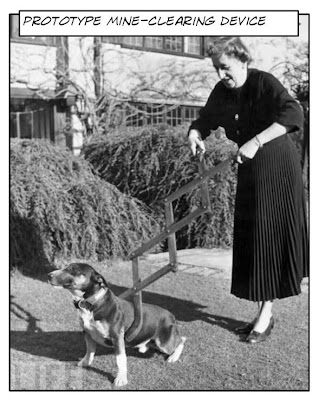