A Lightning Raid On Melbourne

I owe a lot of people in Melbourne an apology. I was, in fact, in your city for part of the weekend. I probably didn't catch up to you. I'm sorry.

Here's how it was: about three weeks back, my publisher and friend Tehani noticed that none other than Cory Doctorow was running a masterclass for young writers at the state library in Melbourne. Cue an opportunity for Jake.

I mentioned it to Natalie. Didn't think there was much chance, though... it's a bloody difficult time of year. To my surprise, Natalie encouraged the idea. Nice!

Of course, someone had to travel with the lad. And it couldn't be Natalie, because SHE had to fly over to Melbourne on the Monday afternoon to stay until early Thursday, while Jake's gig took place on the Monday morning. So it was agreed I'd take the boy, and Natalie and I would do a complex exchange of prisoners on Monday evening when the boy and I got back to the airport in Launceston.

Then my buddy Rob Heather -- who works at the library -- noticed that Cory was also doing a masterclass on digital fiction for adult-types, and that the Sunday class had openings. Hmmm. Digital fiction? From Cory Doctorow? That sounds like something that an author with a new, digitally-distributed novel should get to, doesn't it?

So in the end, Jake and I flew into Melbourne, arriving at about ten. Rob picked us up at the airport, along with his wholly delightful daughter whom I had not previously met. (She's small, cute, clever, and very confident: a marvellous two-year-old.)

By midday, we were eating lunch in a very busy, very upmarket Italian cafe-thing somewhere mid-city. Apparently Geoffrey Rush was there as well, somewhere amidst the throng. I didn't have a sightline, so I can't say one way or the other. I can say the pizza was good.

After lunch, we had just a little time to check out Readings Book Store. I bought books. Too many books. Then Rob had to take off with his miniature daughter -- whereupon Master Barnes (who met us at the cafe with his son, who is a close friend of Jake's) took over. We dropped our bags at The Windsor (courtesy of Wotif.com) and then they threw me out at the library, where I spent two hours paying attention to someone much better paid than I for doing this writing stuff.

Cory had some useful stuff to say, and at the urging of Tehani, I offloaded a copy of Path Of Night on him. He was very gracious about it. I can only hope he remembers to take it with him, and possibly even read it at some point... that would be handy, I expect.

Are you keeping track of time? I am. The masterclass finished a little after four pm. We dashed back to Chez Barnes, and watched the Doctor Who 50th Anniversary show -- which I found rather disappointing, I'm sorry to admit. And then we dashed back into the city for dinner at a Szechuan restaurant favoured by Barnes and myself... a dinner which was much, much less disappointing than the Doctor Who special. 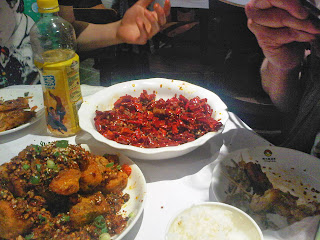 I'm pretty sure that was the chili beef skewers -- that bowl full of dried chillies up there in the middle. Yes, it's as hot as it looks. But it tastes even better 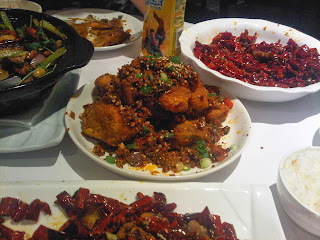 Center of picture would be the spicy cumin pork ribs. With szechuan pepper. And chili. And cumin. Did I mention cumin? 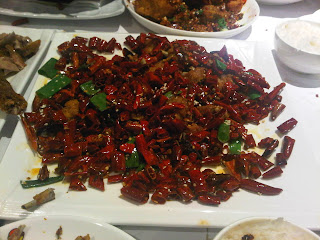 And that would be the Chonqing Chicken, if I got the spelling. Again: it's every bit as hot as it looks. If you examine the picture closely, you will actually see bits of chicken amidst all the dried chillies and the sliced green onions...

Jake ordered tea-smoked duck which was magnificent, and Barnes the Younger ordered chili prawns, which likewise did not disappoint. I grabbed a large bottle of Tsingtao, and we dove in: weeping, sweating, roaring, noses running... oh, yes. Damn.

Tasmania: it's a great place, but there's really not enough chili down here.

Jake and I made it back to the Windsor and flaked out.

Next morning, we did the breakfast thing at the hotel. Then we got a ride with a Somali cab-driver (who was amiable, and happy to talk about his experiences) to the library, and by 10.00 am Jake was busy listening to Cory Doctorow. Meanwhile, I wandered off with a lovely woman named Heike who had a couple of kids in the same masterclass. We spent half an hour in conversation until Embiggen Books opened... and at that point, our acquaintance kind of slid, because we were both  more interested in the books. (Although to be fair, Heike turned out to be a fine and interesting human being, and if I lived in Melbourne I would totally send Jake over to play with her kid and Barnes' kid, because it turned out that Heike's boy and Barnes' boy went to the same science club... and Melbourne was smaller than I expected.)

Anyway. I also got a phone call from my old friend Heather, who also works at the libary. She had just time to come over and check out Embiggen with me. (I really can't recommend that store enough, by the way. It is one of the coolest bookstores I've yet seen. Not completely balls-to-the-wall pop culture and geekery like Minotaur: just a remarkable selection of entertaining and challenging books in a small space. And a very, very helpful and co-operative owner/operator)

So Jake's gig finished about twenty past twelve. We caught a cab to Southern Cross station, hopped a bus for the airport, grabbed a really shitty lunch at an airport cafe, and made it back to Launceston around four thirty in the afternoon. At that point, Natalie met us at the airport... and there she stayed.  She'll be back on Thursday. Until then, I'm sole parent. And many, many thanks to Tehani who kept Genghis and the Mau-mau after the kiddie cricket last night... that meant I only had to cook for two when I got home.

And that was my big weekend in Melbourne, yeah. Oh, there was more. There always is. Cricket updates, for example. Did you know The Netherlands won by 29 runs? I certainly did. Oh yes. Barnes told me about eight times, I think.

But you get the picture. It wasn't quite planned out to the last minute, but there really wasn't any time loose. And as it is, Jake missed a day of school, and it turns out he missed some sort of booster injection thing, and we're missing bits of school uniforms and school ties, and there's a bass lesson today and then theatre and orchestra, and the white car is still under repair so I'm doing everything with Natalie's little blue piece of Ford, and tomorrow somehow I have to get the kids out of Launceston and back to Scottsdale in time for the ju-jitsu class, and...