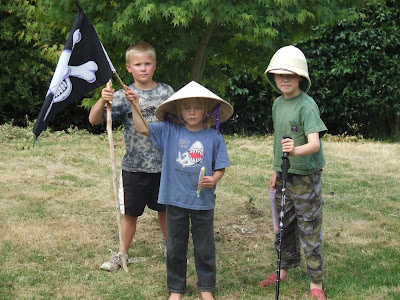 Summer in a temperate region isn't the same as the summers I knew in Queensland for so long. Just for starters, we think of 31C as a terribly hot day. Everybody slows down, or comes to a halt. People move from shade to shade. They turn to each other at check-out lines in the supermarkets and say things about the heat, and the humidity, this terrible weather.
And why not? We get maybe one day like that every two or three weeks.
Today started cool and overcast, which didn't bode well for the birthday party the Mau-Mau was attending, down at the pool in Scottsdale. But she's a water creature, and no matter that it was chilly, she was delighted to suit up in preparation for a few hours splash time.
Not so the boys. I asked 'em a couple times, but they insisted they didn't want to swim. Luckily, Amazing Neighbour Anna's small blonde daughter -- the Mau-Mau's very best friend in the world -- was invited to the same party, so in the end, the Mau-Mau got a lift home, and the boys didn't have to hang around the pool reading their new books. That was a good thing, because the clouds parted, and it got seriously warm for a while there.
The clouds have closed in again, though. It's not cool; not really, by Tasmanian standards. But it's not really hot either. It's a Tasmanian summer's day.
I love 'em. The light starts at about 0400, and by 0700 it's hard to even think of staying in bed, unless you're reading. Oh, and you know how in Queensland it's too damned hot to lie in bed reading once the sun comes up? Well, not here. Night times, the temperature drops and you still need a light quilt to stay warm. Staying in bed an extra half-hour to read in the morning is a huge treat.
That light. It lasts forever. It's not really dark until 2130 or so, and even then, there's still a twilight that you can navigate by, if you want to stroll around the yard. So much light... the kids love it. I have to hide them from it, sometimes. The depleted ozone makes sunburn hard to avoid. We use a lot of sunscreen, but the Mau-Mau was born naked and she takes every opportunity to remind the world of that fact, so even with copious sunscreen slathered on her, she's turning the kind of all-over golden-brown tan that can only be envied by most of the world's movie starlets.
Summer holidays and outdoors play. Does it get any better? Is there any part of childhood that's ever as good as this, ever again? Right now, my two boys are outside, playing "Explorers" with one of Amazing Neighbour Anna's lads. (Yes. I currently have five kids around the place. But they're doing their own thing, and I'm letting the reins rest lightly for the time being.) I have been told earnestly that they are charting an unknown region of South Africa.
Elder Son is wearing Younger Son's Christmas solar topee, and carrying a collapsible walking-stick. He has a sketchbook and a pencil, and he's noting down all of their discoveries. So far, they've breathlessly shown me a stag beetle, a protea, a fuchsia, a bucket of blueberries, another bucket of red currants, a handful of black currants, a green apple, a small green plum, a garlic flower, a caterpillar, and an interesting red rock. South Africa is being thoroughly explored.
Younger Son appears to be responsible for the safety and security of the expedition. He is wearing his Vietnamese conical cane hat, and carrying a bamboo flagpole to which a large Jolly Roger flag has been somehow attached. The third member would be Master T, of Amazing Neighbour Anna's brood. He has a walking stick which is an ongoing project for myself and Younger Son: shaped from a wattle sapling, it's been shod in galvanised iron, and is slowly being sanded and carved with a nice bird's head for the handle.
The girls are quietly watching a cartoon. They played for ages, and they're quite tired after their morning of sun and swimming.
I'll let them all go for another hour or so. Then I'll return Neighbour Anna's brood, throw mine in the bath, and cook up a big batch of chicken and sweet-corn soup. Afterwards there will be shortbread, and cream, and piles of fresh berries. (So many berries! This morning, it was all about fresh raspberries and pancakes. The boys have been harvesting blueberries and redcurrants. Sometime later, I'll go and pick a kilo or two of ripe blackberries. Tomorrow, we're going to a blueberry farm in the early morning, before it gets too hot.) Eventually, we'll play a few board games until the boys are getting too tired, and finally, sometime around nine in the evening, they'll go to bed.
And tomorrow, they start afresh.
I don't often envy children. But days like this...
Posted by Flinthart at 8:48 PM 5 comments: