It Got Cold Today

Seriously cold. As in maybe record-breaking.
At about 1000 this morning, there were big, fat flakes of snow swirling around the yard. Admittedly, they were mixed with rain and sleet, but the only other time I've seen snow here was a brief flurry of very little flakes at 0800 one morning, about eight years back.
The kids and I layered up like Matroshka dolls. We were planning to set out for Mt Barrow, where the snow usually falls. However, we only made it a hundred metres or so from our driveway before the snow was noticeably piling up on the road. A few hundred metres later, we saw it all over the big tree ferns. And then there were small trees, bent under the unaccustomed weight, leaning onto the road and disrupting the traffic. Fortunately, since the snow was maybe five cm deep on the road by then, there really wasn't much traffic to disrupt.
We made it as far as the lookout, which has perhaps two hundred, maybe three hundred metres of elevation on this house. This is what things looked like up there. 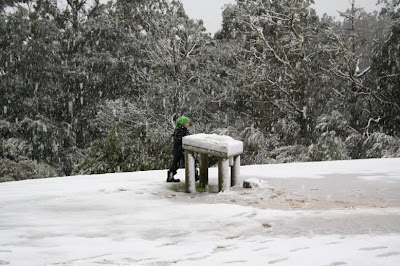 A few minutes later, the police turned up from the direction of Launceston. They were driving very slowly. They weren't impressed by the plan to drive to Mt Barrow.
Later, by the time I went shopping to Scottsdale, they had closed the highway. I didn't find out about it until I came down, round the sweeping corner, and discovered 'road closed' signs facing the other direction across the road. Being the scofflaw I am, I drove around them. Then I went to the bank, the post office, the butcher, and the supermarket. On the way home, I drove back around the road closed signs. Mmmm. I am a rebel. And illegally obtained roast pork and vegetables taste much nicer, anyway. 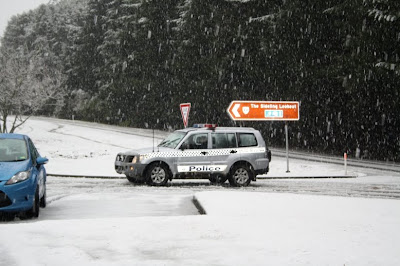 At first, the Mau-Mau was having a good time. But then she took off her pink gloves so they "wouldn't get wet." Then she complained about her cold, wet, hands. Then she fell on her face, and howled quite a lot. No snow expedition is complete without a good Mau-Mau faceplant. 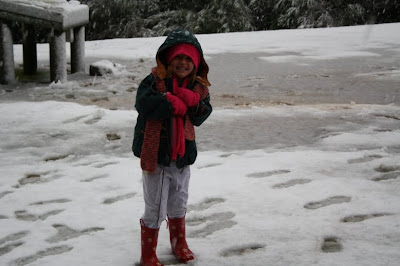 Young Genghis, on the other hand, just couldn't be stopped. I suspect he has veins full of superheated antifreeze, not blood at all. 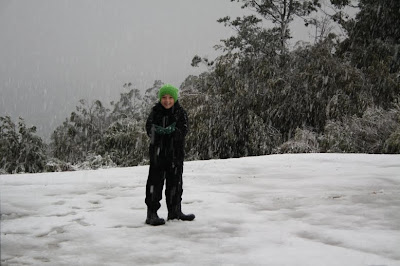 Check it out! That is very nearly a real snowman. It's a bit leafy, and there's some wallaby shit embedded in it, but it's much bigger than any of our previous efforts, and it actually held together. 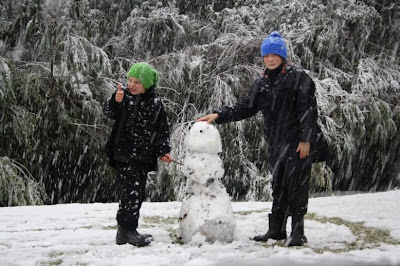 By the time Mr Snowman was a reality, the Mau-Mau had hunkered down in the car, never to emerge again. Everybody else was cold and soaked, because at this altitude there was still some rain among all that snow. We decided not to go for Mount Barrow. Pity.
An interesting thing: across the road from the lookout is a commercial plantation of Douglas Firs. They're pretty sizeable, and they've been there as long as I've lived here, so I guess they're probably fifteen years old or more. Anyway, despite being evergreens from a snowy ecosystem, they've been growing here without yearly snow. Because of that, the unexpected weight of the falling snow was too much for them. As we mucked around in the snow on the lookout, we kept hearing big branches snap and fall. It sounded like a giant, stomping about in the forest.
And finally: this is Jake's Youtube footage of the winter adventure.
May not mean much to those of you from real snow country... but for us, it was pretty mindblowing.
Posted by Flinthart at 1:58 AM 3 comments: