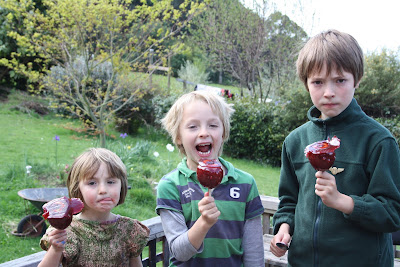 Toffee apples, yes indeed. With Natalie being called out a lot, extended sessions in the garden, out of earshot of the house, didn't seem such a good idea. I got most of what I wanted done, but it became clear that the remainder of the job would have to happen another day.
And so we decided to answer Younger Son's curiosity regarding the tray of Toffee Apples he spotted in Woolworth's this morning. The tray was empty, so I tried to explain - but then I thought: no, how difficult can a stupid toffee apple be?
Not very, would be the answer. Sugar, water, a little cream of tartar for flavour, a dash of colour, a heap of boiling, and periodic drops into a bowl of icewater. When you hear the syrup make crackling noises as it hits the water, turn off the heat. Dip your apples (this stick goes in first!) and swirl until coated. Leave stickside-up on greased baking paper. Done.
Note: probably wasn't clever of me to refrigerate the apples. Those beautiful specimens do NOT have a delicate, crumbly toffee coating. They have about two millimetres of sugary armour. Eating the bastards is a hell of a job that has taken all three children outside, with a small hammer...
Posted by Flinthart at 9:33 PM 6 comments:

Something Of A Blur