The Day Of Days

Well, I've had worse Christmas Days. The kids did NOT awaken at cracka and come storming up the stairs. Instead, as trained, they stayed quiet until 0700, at which point they came upstairs in a calm fashion, carrying breakfast.
Breakfast? Holy shit! They did it!
Natalie got coffee and her favourite muesli - which is heavy enough to ballast a zeppelin, and guaranteed to make your gastrointestinal tract fearsomely healthy. According to Elder Son, they had to make four prototype cups of coffee before they finally got one right...
And I got a big mug of green tea, and two slices of multi-grain toast with fresh avocado sprinkled with salt, pepper, and a squeeze of lemon juice. Yay me!
There was a brief flurry of phone calls and texts in the morning, and another round of breakfasts because we had an overnight guest who needed pancakes and fresh blackberries, apparently. And then the serious business of opening presents started.
I made out like a bandit: a couple of books, a bag of bizarro fluffy dyed cotton pompoms with glitter from my daughter, two sticky-tape dispensers from Younger Son, and a book of redeemable Dad Coupons from the Elder Son. Sigh. Ah well. Such is life.
Natalie got some books too. And Sea Monkeys. She always wanted Sea Monkeys as a kid. Now she's got them.
And the kids? Well, it's all about them, innit?
Here's the Mau-Mau with two of her favourites for the day... 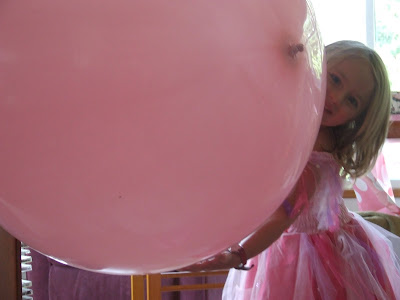 The pink princess dress is the replacement for the much-loved fairy pink dress she's worn pretty much every day of her life for the last two years. This new one came from a ballet shop in Launceston, and I hope it serves half as well as the old one. Oh -- and the really farnarkling big pink balloon I found in a party shop. Couldn't resist it. The Mau-Mau loves it, naturally. 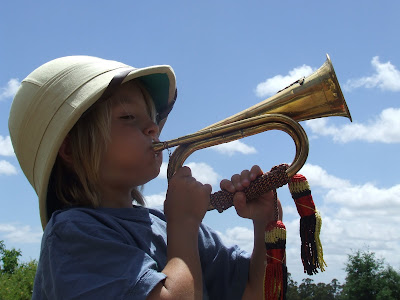 Younger Son did very well, thanks. Seeing as it was his birthday yesterday, he scored this bugle and the solar topee ( found 'em both in an Army Disposal in Launceston), plus his first-ever fishing-rod, and a regulation-weight cricket ball, among other odds and sods. Very pleased with his haul, he's been working hard on playing "taps" -- which is interesting, because he has no idea how it goes. 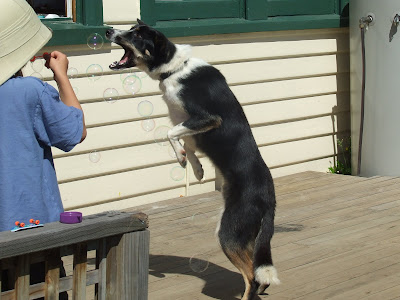 The dog got one of his favourite treats too: people blowing bubbles at him. He loves nothing more than leaping frantically into the air, scarfing down soap bubbles until he gets sick, froths at the mouth, and wanders away making a noise like "Hork! Hork! Hork!" 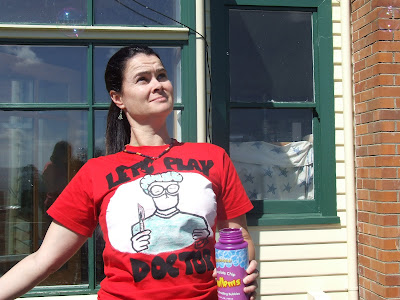 There's Doctor C. I'm afraid I got a little creative this year. The T-Shirt is my fault. Turns out there's nowhere in Launceston that will print personalised stuff, so I had to paint it and print it from scratch. Turned out okay, I reckon. The good doc is blowing bubbles here - chocolate-scented bubbles at that. The dog was very pleased indeed. 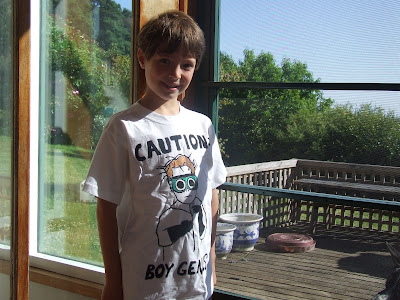 Elder Son is here wearing another of my creations. It's based off a costume he wore to a party some months ago. He's very pleased. He scored a few good things as well, including a vest full of pockets to keep all his junk, plus books and comics and aeroplanes and stuff. 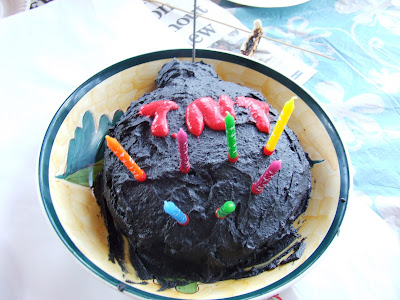 A quick trip back in time, but it's appropos. Younger Son's birthday was yesterday, but this is the infamous Bomb-Shaped Cake of two weeks ago. 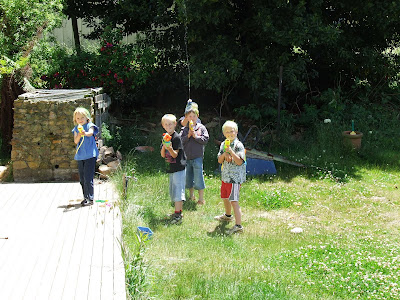 And there's the watergun birthday party in full flight...
What else? Well, I picked up a copy of "Last Night On Earth" and "Settlers of Catan" and even "Wii Cricket", so we've been playing games. And I char-roasted a HUGE ham, after dressing it with sweet soy and chilli and sesame and clove... ate it for lunch with twice-cooked taters and a garden salad. It will furnish fine sandwiches later, in between drinkies.
Oh - and the boys were also given electric pickups for their instruments (cheap) and access to their mother's little amplifier and FX pedal. They were absolutely and totally delighted. Spent over an hour just sawing away at cello and violin, trying out echo and fuzz and wah-wah and all sorts of good stuff. Noisy as hell, yes, but anything which helps them get excited about their music is good.
I'm gonna sign off here. The Mau-Mau has been permitted to start one of her new presents -- a spanky new Godzilla flick. It's time for me to make popcorn, mix up some rum and lime, and kick back. It's been a good day.
I wish you all as fine a time, or better.
Adios!
Posted by Flinthart at 10:22 PM 6 comments: