I didn't do much useful writing this morning. One would think I could, what with the kids catching an 0800 bus, and me not having to go shopping or anything until 1400 or so.
Truth is, I was mentally wasted. The weekend was Not Easy.
It probably started Friday sometime. I had to make sure all the kids were packed properly for a weekend on the road. And I had to ensure that the double bass and the cello and the violin were waiting in my car for the changeover after school. And of course, I had to be packed myself, yep.
So a little after three, Natalie zooms up the drive in her little blue machine. She's got the boys. They jump into the Earth King (now chucky-jam with musical instruments, as per instructions) and zoom off.
Roughly twenty minutes later, I collect the Mau-Mau from the bus stop, get her changed into civvies, and we zoom off after Natalie. Once we hit Launceston, I have time to grab some sandwiches for the kids, and some sushi for Nat. Then I refuel the car, and zip round to the orchestra zone to meet Nat and the boys after their practice. We convoy from there to the house of a friend who is supposed to look after the Earth King and the cello and the bass for the weekend.
It's now roughly six pm. The kids are eating in the little blue car, and I'm driving. Two hours later down the midland highway and left, and we're at Hatchers' Manor, near Richmond. I won't go on at length about the place, but I will say this. I stayed there once, about five years ago, with a friend, and I've never forgotten it. Neither has he. We spent most of the weekend laughing at the mad architectural quirks of the place (a toilet placed under a sloping roof meant I actually had to lean sideways when I went for a piss!) but at the same time, it was wonderfully comfortable, great value for money, and the people running it couldn't possibly be nicer. I've been awaiting the right moment to drag the family down there... and this was it. 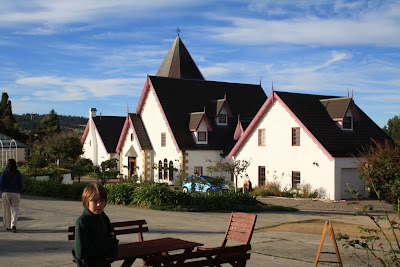 Yes. It is modelled after somebody's idea of a Swiss alpen chalet thing. And yes. The tower/turret has an apartment in it. And that pink trim? All over the interior too. Yep. But trust me: comfortable, friendly, spacious - brilliant place.
Mind you, after a two-hour drive all any of us wanted was bed. I ducked out to Richmond, found beer, cider and pizza, then returned to feed everybody and then more or less crash.
Next day we took in breakfast. Then we zipped down to Hobart, and dropped Natalie at her music thing - a chamber music workshop, as it happened. Guess it's a change from the Irish stuff she usually does. In any case, that left me and the kids for the next six to seven hours. I made a call to an old friend, and then we took off for the Salamanca Markets. 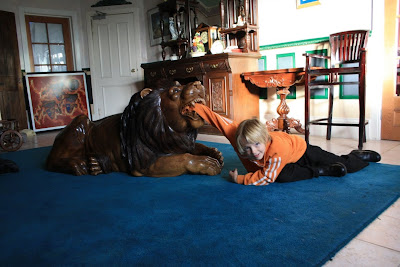 That's the main lobby of Hatchers Manor, by the way. Just in case you thought I was exaggerating when I said the place is peculiar. But fun.
Hobart's Salamanca Markets are good value. We met up with my friend Pete, shopped for Mother's day presents (we found some flowers and a really nice scarf in Lao silk) and bought a whole bunch of different apples. One stall had twenty-eight varieties! We're still tasting them, and arguing over which we like best. 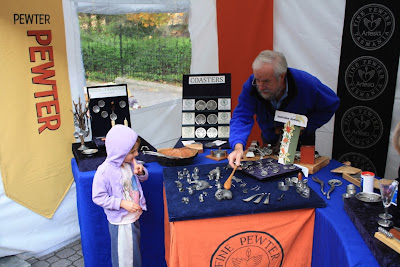 The Mau-Mau got involved with this gentleman's sales pitch. She enjoyed naming the pewter animals. 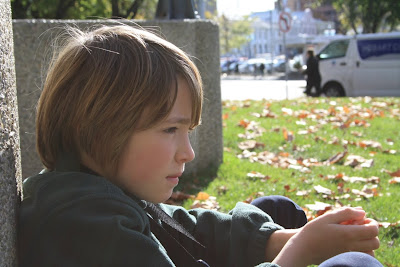 Jake in a pensive moment 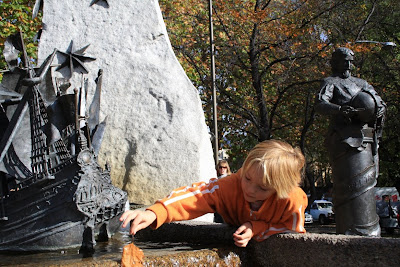 Genghis racing leaves down the Abel Tasman Fountain.
Lunch was fish and chips and woodfire pizza at a very acceptable little place near my friend Pete's residence. And then, since we still had hours to kill, we went to a big park in Sandy Bay with a very fine playground, and followed that up with a long beach walk. Finally, roundabout four in the afternoon, we made it back to Natalie's music zone so we could listen to her concert.
Only to discover we were locked out.
Ah well. Par for the course, really. We found a nearby paddock, and the kids ran around and wrestled even more, and we ate more apples, and listened to the car radio, and finally, finally, Natalie came out and joined us. Whereupon we promptly went BACK to Pete's place so Nat could have coffee. And then we went to dinner at a place called "Written On Tea", which gets a big Flinthart Food Tick for anybody looking for a decent Chinese/Japanese fusion feed in Sandy Bay at a very reasonable price. (The spicy pork with rice vermecelli was great.)
And then it was back to Hatchers Manor.
Next morning, the kids practised their ninja concealment skills. Happily, the multitude of cupboards in our spacious rooms gave them plenty of help... 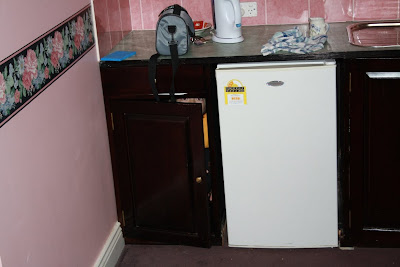 That would be Jake. 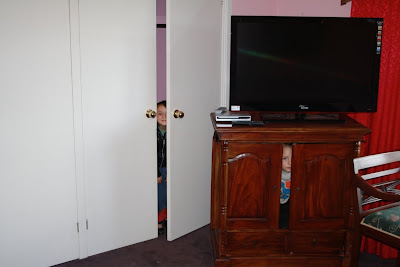 And of course, the Mau-Mau and Genghis.

Naturally, being Mothers Day, the whole presents-and-flowers thing was done. And breakfast. Did I mention that among all the kid-wrangling on Saturday, I also stopped at a supermarket and collected fine cheeses, deli products, bread and fruits? No?
Well, I did. And a mighty breakfast was made. And then?
Why then, I drove us all back to Launceston. We went back to the House of Instrument-Minding, and Genghis and I hopped into the Earth King. We went to the supermarket, and then headed home. Seeing as how it was still Mothers Day, I promptly created a duet of charcoal-barbecued chicken and duck, along with a fine salad, and a bottle of excellent bubbly (courtesy of Chaz.)
And in keeping with the nature of things, I was the last one to bed... stayed up to make lunches, catch up on email, etc.
So: that's why I didn't have the necessary mental focus to churn out 3000 words this morning.