Natalie and Jake returned from Ireland on Sunday morning, as planned. I was well enough to drive in a collect them from the airport, which was damned handy. (The antibiotics appear to be doing some good. Not fixing everything, but at least I can breathe again.)

Of course, they fell asleep in the afternoon, and lay like logs. Still, they brought presents, which was good. I have a fine bottle of Jameson Irish Whiskey which my antibiotics and I are observing wistfully, from time to time.

Everybody took Monday off school, sensibly enough. And by a useful coincidence, it was also the Mau-mau's birthday. Her sixth. I've had a daughter for six years, apparently. Fuck, eh? Who knew?

Six year old girls and birthdays are... challenging. They expect rainbows, unicorns, and random falls of sugary pink candy from the sky. The Mau-mau did okay. Her mum brought her a pink satin dress complete with puffy skirt and bows and ribbons and underskirt layers. There was also a LEGO dollhouse that took half the day to build. (Kept mother and daughter nicely occupied.) There was a fine tiara of some kind of robust but graceful metal, replete with diamantes and pearl-ish things: high grade costume jewelry which she immediately adopted and adored. There was a necklace of silver. There was an embroidered purse and some bead necklaces from an aunty.

From yours truly, she got the first fifteen issues of the Marvel Godzilla comic, bound in a single edition. (She loves her some Godzilla.) She got a simple digital camera meant for kids, with which she is now photographing the crap out of the entire world. And she got (with help from Ginny in the USA) a very clever paintbrush. You use it with watercolours. It has batteries, and a metal strip down the side. You paint with it, and then with a finger of your off-hand, you touch the wet paint and become part of an electrical circuit that makes the brush 'sing'. Essentially, you form a variable resistor, and by moving your finger to different places on the painted line (with the brush touching, of course) you can change the tone the brush makes. It's very cool.

It's not so much the having. It's the opening, and the getting. I'm quite sure that if we were to wrap a bunch of rocks and get her to open them with sufficient fanfare, she'd be almost as delighted.

She wanted tacos for dinner; I complied, as one does. And I made a fine chocolate cake with whipped cream and strawberries. (Yes. That explains the photos.) And she got to sleep on the floor of her bedroom, in her little fold-out kiddy indoor playtent. What more could you ask for?

But Dark Forces were aswirl. For starters, Natalie appears to have brought back an exciting gastro-enteritis from her Irish sojourn. Jake, as usual, is completely unmoved. The kid gets unwell so rarely that when he does, he's a fucking pain, because he has no experience with things like sore throats, or vomiting, and he gets really cranky about it.

Genghis, on the other hand, Catches Stuff. And last night at a quarter to midnight, I heard an awful, stertorous bark from downstairs. Now, as it happens, I'd only just gone to bed because I'd been watching the Mau-mau (still sleeping on the floor in her tent. Why? You'd have to ask her). She's caught the chest infection that settled on me. By day she's fine, but by night, she coughs like a ninety-year-old three-pack-a-day smoker, and her nose blocks up too. So I was kind of expecting trouble, yeah?

Except that when I got downstairs, I had to put the brakes on fast. It wasn't the Mau-mau. It was Genghis, and he'd just dumped at least a kilo of polenta-crusted salmon, green salad, hash browns and leftover birthday cake all over his pillow.

Not good at all. The bedding got changed, and everything got cleaned up, and Genghis got a bowl - but that mess was horrible, and showed absolutely no sign of being digested, five and a half hours after the meal had been eaten. This is not a good sign.

And sure enough, at 0630 this morning, another thunderous bark yanked us out of bed. The boy is not well. He's currently on the couch watching "Life of Brian", his faithful barf-bowl close at hand... unlike his brother, he's used to this sort of thing so he just takes it in his stride.

The Mau-mau? Oh, she was fine. I checked on her at the first Vomit Volcano event, and she was sleeping peacefully in her little tent.

So, here we are. My family is all home again. Lucky me! 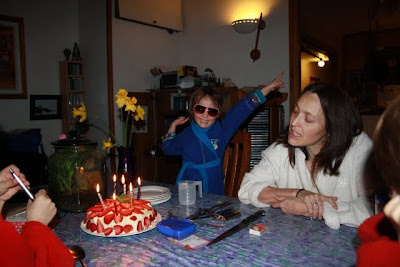 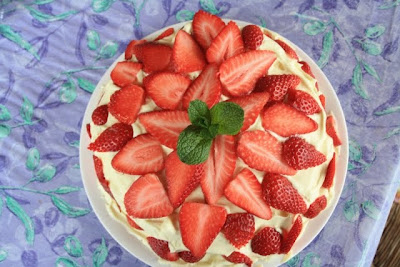