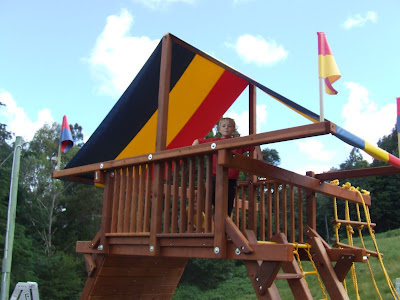 Awww. Doesn't it look nice? All lovely with banners anna stripey roof, yeah. And is that some kind of ropy laddery thing in the background....? 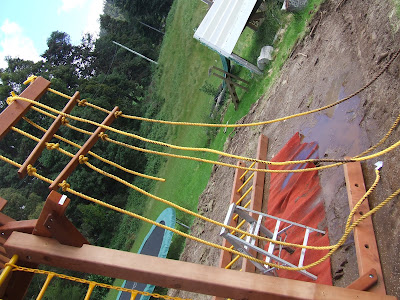 No. No it is not. It is a mucking fudpit from hell.
See the chunk of old carpet there - that burnt-orange hell-refugee from the seventies? That's the only thing preventing that stepladder from vanishing into a treacherous bog roughly the depth of the Mau-Mau. Today was not very productive in terms of Moby Playset.
First I had to drop the kids at school, and set up the Mau-Mau's piano at the school for her weekly lesson. Then it was off to Launceston, where I failed to buy coffee -- Natalie's gonna be cranky -- but managed a few costumes for a certain birthday party upcoming, and a few Christmas bits and pieces as needed.
Then it was home, and I put up the struts to hold that pretty roof. However, with the ladder being useless, I basically had to do my celebrated Oversize Spiderman impression with the cordless drill, which was... exciting. At least for the highest bits.
Still, if I had actually fallen, doubtless there would simply have been a terrible squelching noise, and I could then have waded to solid ground.
Anyway. I got the struts in place. Then I drove back to Scottsdale, picked up the post, did the grocery shopping, collected the kids (and the Mau-Mau's piano) and came home. Whereupon I thought I'd put on the nice stripey roof, and maybe hang that ropy laddery thing.
The roof was a bastard of a job. Typical: there's barely enough roofing material there to stretch over the frame. (Wouldn't want to give the clientele an extra ten mil. That would be WASTAGE!) I had to redrill one set of holding screws three goddam times before I could make it all stretch properly. And of course, the whole goddam thing was done in Spiderman mode.
Then I went to do the rope ladder thingy.
The ropes are long. They went into the mud. Then I had to pull them through the rungs, and make knots. The mud flew off in all directions. Mainly mine.
Standing on a slowly sinking stepladder on a filthy seventies carpet over the mud, tying knots, I glanced down and came to a terrible realisation. The ropes were NOT all the same length. No, indeed. Worse, the two ropes which I thought were attached to the tyre swing were, in fact, completely free agents. And they matched the length of two of the ropes I had put on that ropy laddery bastard thing.
Fuck.
Check the instructions. Nothing about different lengths of rope. Oh -- and in their illustration, the goddam ropy laddery thing has only THREE ropes, not four. But as I mentioned before: that's the generic basic unit illustrated in the instructions. Ours is a bit upmarket in places -- and so I just have to sort of guess and improvise in those places. This is one of them.
Careful examination of the rest of the instructions show that there is also a climbing rope, and by the look of it, the thing is a bit shorter than the ropy laddery ropes. Therefore I need to remove the two short ropes I've put in place, and replace them with longer ones. And one of the shorter ones will become the climbing rope. The other?
Fucked if I know. Nothing about it in the instructions that I can find.
I've had a shower now, and stopped swearing. A beer is helping. Now I have to get the dry clothes off the line, cook grilled pork meatballs for our Vietnamese spring roll dinner, then sew two costumes for Sunday, gather a few bits of software from the 'Net and install them to Natalie's computer so that tomorrow I can go to the school and do some stop-motion filming with Jake's class.
No worries. After all, it's goddam Christmastime, right?
Posted by Flinthart at 9:59 PM