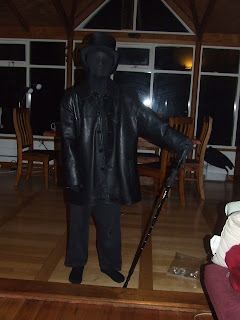 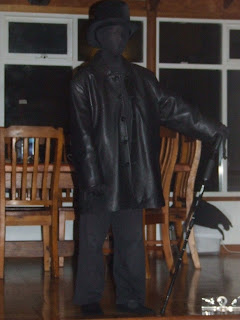 Don't mind the tatty trousers. The boy was concerned that the spandex suit made his legs look skinny. In fact, he said he felt like a "flasher" without his pants. What can you do?

This wasn't the original intent for that suit. (It's called a "morphsuit", by the way. They're not expensive, and you can find 'em for sale online if you want. They're very cool.)  I found them a while back, and thought I might lay one in against the boy's birthday. But in the interim, his mother found him that top hat at a store in Launceston. And while we were in Melbourne for the SF con, I realised the only jacket he had was a horrible, manky green thing with a broken zip that he wore as part of his school uniform - so we hit the Vic Markets, and acquired him a nice chunk of cow-murder.

Yesterday, he was home from school sick - cough, throat, all sorts of badness - and so I thought I'd give him something to cheer him up. That's his early birthday present from me, there, and he's taken to it nicely. We have no idea yet what powers The Black Hat may have, but he's an eerie presence. I had a chat to Jake about using his body to 'create character' through thoughtful movement, and suggested he try not speaking...

... and honestly, the outcome is nifty. He's got enough body control from the martial arts and the trampoline and the gymnastics to move with a certain slow, deliberate grace, and the whole silent communication thing is very cool. Evocative gestures, postures - might have to send him somewhere to learn a bit about mime, because he seems to have a natural flair for it.

Anyway. Today's the day of the not-party. We've got people coming through. The sun's come out. We're going to have a bonfire, and cook stuff, and then we'll bundle up with blankets and sleeping bags and doonas, and make lots of popcorn, and go up to the shed to watch movies. Jake has decided we shall watch Peter Sellers "The Party", and then "Big Trouble In Little China", and maybe "The Terminator" if anyone is still awake.

What a well-bred kid, eh?

Posted by Flinthart at 4:07 PM