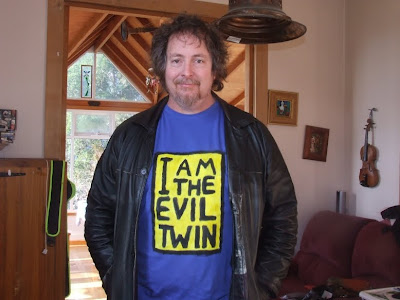 That is my new shirt. Yes. I got out the inks and paints again. Personally, I think it sums up the situation pretty well. Fair warning, I reckon.
We're at the halfway mark on the current batch of school hols. There's a big push on to change the school year to match the mainlanders next year - four terms of ten weeks each. Not sure I like that. I remember being a kid. School is dire, boring horror and you live for the holidays and weekends. Personally, I think there's too much time allocated to classroom hell already.
The snow stuck around for a surprising length of time. As we drove into Launceston yesterday for Genghis' regular bass lesson, there were still little patches of snow by the roadside along the Sideling Range. I've never seen that before. Mount Barrow was appropriately snowy, and when we came over the hills into Launceston proper, I could see that the Western Tiers were white from one end to the other. Great start to winter.
In other news... anybody got a cure for kids fighting? Genghis gets bored, the first thing he starts doing his irritating and baiting his sister. And then it's on. This has been going long enough that even my patience is worn out. Genghis has been fetching an awful lot of firewood lately, and we've literally reached the zero-tolerance point. He doesn't get the benefit of doubt any more. A single wrong word - even a sideways look, sometimes - and he's off the field. It's really fucking irritating.
We're doing our best to explain it to him, and make him understand that if he dislikes the situation, it's in his power to change it. But there's only so much of that kind of thing that sinks in when you're eight years old. And to be fair, the Mau-Mau is an annoying little gobshite too.
Well. I've had a quiet Sunday morning, but that's about to end. I've set up pizza dough for the evening feast, and I'll have to go down to the supermarket for the Sunday papers, plus a few other bits and pieces. Then I'll get back, and run the pump. Then I'll fire up the chainsaw, cut up a few of the older deadfalls and extend our firewood supply. That'll occupy the afternoon nicely, and then it's into the dinner routine.
Thanks to the redoubtable Tehani, I've been pushing Jake into various writing competitions. The school can't really help him with his narrative and creative writing skills to any great degree... he's kind of past that. Happily, his teacher is very helpful, and she understands the situation, so we're throwing different entry forms at him, and seeing what falls out. I've got his entry for the Bauhinia Literary Awards all enveloped, ready to go, and he wrote a cracker of a piece of poetry last night for the Dorothea Mackellar competition.
By way of encouraging him and keeping him company, I've written a piece for the Bauhinia awards too. Haven't done something at the 2000 word length for a while. It was kind of refreshing. I figure if he knows his old man is entering the same competition (they have different age categories, of course) he'll be more interested in the various outcomes. The only negative I can see is if I manage to score a gong and he doesn't... but I don't even think that will peeve him. He's enjoying the writing, and he's excited about being involved in a 'real competition'. If I score something and he doesn't, I'm quite sure he'll put it down to the professional experience, and roll with the punches.
Personally, I'm hoping he scores something more significant than me. That would really give him a boost. We'll see.
Damned if I'm entering the bloody Dorothea Mackellar disasterzone, though. I'm not even certain there is an adult entry... but I don't care. The 'sunburnt country' is my pink butt, and Dorothea Mackellar can kiss it.
On a final note: I saw a rather enjoyable movie the other night - a loaner, from Q-Dog of the Shite Team. It's called "The Warrior's Way", and it's a hybrid Korean/Hollywood piece with CGI courtesy of Weta. It's a heady mixture of samurai/ninja and Western B-movie, and it's very cool. It never takes itself too seriously, but still manages to hit all the right notes. Homages to the greats of both Eastern and Western cinema, decent performances all round (and what is Geoffrey Rush doing here? My! I guess he wanted to add 'ageing drunken Western outlaw with a heart of gold' to his 'Ruthless Pirate Captain' B-movie chops) and strong story arcs for all the more important players.
Very definitely worth an evening in. Find it on DVD and enjoy hell out of it.
Posted by Flinthart at 6:33 PM