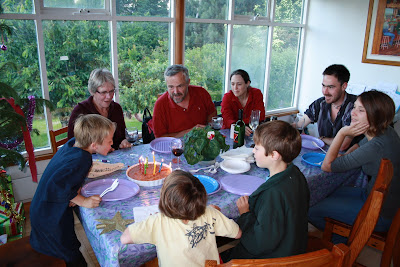 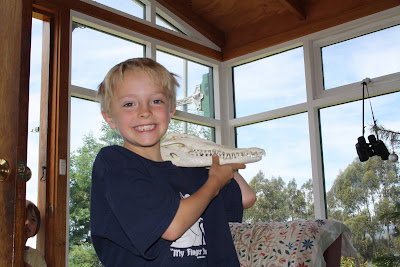 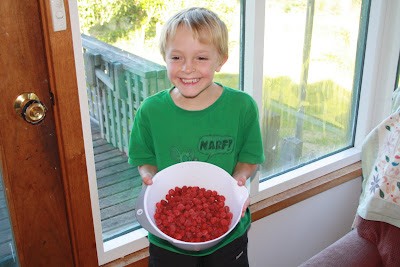 Of course, the ACTUAL best thing going on at the moment is the raspberry patch. It's finally kicked into full production. That's... ummm... the fourth two- or three- litre bowl I've extracted over the last few days. I didn't get time to pick again today, so I expect tomorrow I'll fill another bowl that size. The sun has come out at last, so the raspberries have finally become sweet and tasty. And the berry-patch is now so big and daunting that I've started chucking big flat stones into it to become stepping-stones for future use.
Yeah, I know. I should probably run posts and strings and stuff. But you know what? Fuck it. I've got a big, chaotic patch of raspberry plants that are almost as tall as I am, and I'm damned if I'm going to try to get all anal-retentive about it. I'm going to set up stone pathways through the patch, and in winter, I'll go in and clear out all the old, dead growth. Then I'll throw a bunch of blood-and-bone and well-rotted manure all over the place, and next summer I'll have EVEN MORE goddam raspberries.
By the way: I just discovered that if you throw a handful of ripe raspberries into a couple shots of gin, wait ten minutes, then add tonic water, you get the BEST goddam Gin and Tonic of all time. The colour and the tangy fruit flavour of the berries perfuses the gin completely, turning it a lovely shade of reddish pink, and complimenting the sharp herbal flavour of the gin and the bitterness of the tonic. It's pure black magic, and as soon as I'm done posting this, I'm off to have another.
Oh. That would be right now. Cool!
Have a good Christmas or whatever, eh? G'night.
Posted by Flinthart at 2:56 AM