That Was Christmas, Then The Chocolate Fairy came visiting for our Christmas. And she brought a friend. (Okay... the T-Shirts are courtesy of the Flinthart Family. But the visitors DID agree to wear them...) 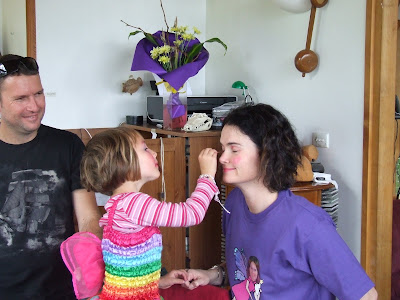 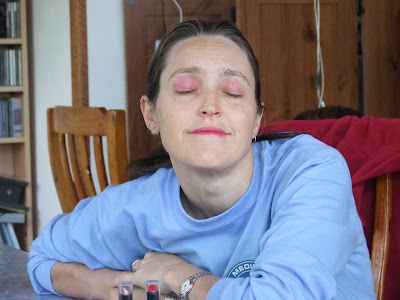 Natalie kindly consented to be made up by the Mau-Mau. Why so serious? 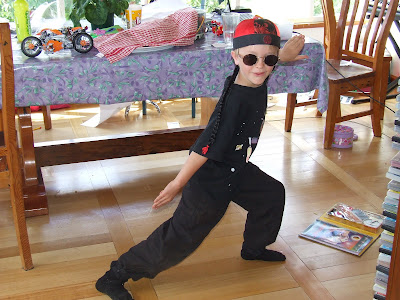 Younger Son now has sunglasses. And a very politically correct Chinese skullcap. From the same kind, caring gran that sent the make-up for the Mau-Mau, yes. 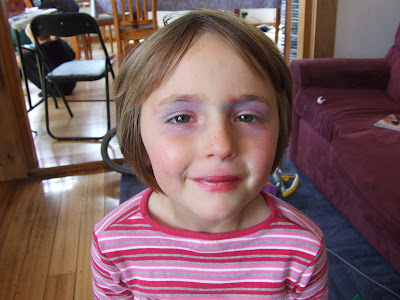 The Mau-mau got make-up from her gran for Christmas. I expect to hear from Child Protection any time now...
And now I'm very tired.
Gifts were exchanged. I got a key-ring. And an amusing apron, for cooking. Yes. And a copy of 'Evil Genius', to install and play upon my computer.
This is not a measure of my family's lack of thought. This is a measure of my contentment. I have pretty much everything I need, and there's not a whole lot I'm prone to wanting, either. I guess at some point a really cool nightscope for the .22 would be nice. But that's expensive. And I'm not even certain it's legal!
Other than that? I guess I'd like more time. But that isn't much of an option, is it?
The kids are happy. The Mau-Mau got painting and gardening gear, and a mad grandmum sent her make-up. Do I have a photo? Let me check... oh yes. Okay -- see the bottom picture above, eh? I'd try to do a better job of photo layout and integration, but this is 'blogger'. It's pure shit for photo integration. Screw you, Google.
Younger Son got all kinds of stuff. A microscope kit was his favourite, I think. He's been looking at stuff ever since. Heh. He wanted blood, and Natalie agreed he could have some later... but halfway through lunch, the Chocolate Fairy (one of our visitors) had a minor nose-bleed, and Younger Son was on her like a starved vampire. It was pretty funny, because the rest of us had forgotten a) WHY he wanted some blood, and b) even the fact that he'd wanted it in the first place. So we sort of stood there, blankly, for a long, embarrassing moment when he jumped up and asked the rather perturbed Chocolate Fairy if he could have some of her blood.
Once we worked it all out, though, that was fine. And Younger Son got to see blood cells. Yay!
Elder Son has scored a game of Balderdash, among other things. And Natalie got coffee, and a very small 1000-piece puzzle... and I found her a "Starfleet Medical" skivvy in the original powder blue. Unfortunately, they seem to have discontinued that amazing 1960s velour material... hers is merely a sensible, comfortable cotton. She's been enjoying wearing it down to the hospital, though.
Beeso rang somewhere around midday. Turns out he's had a minor issue with rental vehicles, and has altered holiday plans to head Hobartwards at first. He's aiming to be back this way around the 3rd, which will be cool... he'll miss the raspberries, but the blackberries should be in full production, and there may be some local cherries by then. They've been delayed by the cool, wet spring weather.
I do hope Beeso wasn't too alarmed by my notes to him about the road approaching Chez Flinthart. We'd been casually exchanging emails to keep in touch, and I had a bit of a brain collapse. Y'see, the road to my place from Launceston is steep, narrow, and winding in places. And at night, it is the domain of sundry kinds of suicidal animal life -- possums and wallabies who wait in the undergrowth by the roadside, then literally hurl themselves into the path of your vehicle. And of course, if the weather is inclement - well, let's just say that this is the ONLY place I've ever had to try to drive through heavy rain and dense fog simultaneously. I actually didn't think that was possible until it happened to me. And by now, it's happened several times.
The issue was that Beeso was due to arrive fairly late, and would have been making the drive after a long flight, in a rented vehicle, without any real foreknowledge or experience of the damned place. And it didn't occur to me to say anything about it because...well, I live here. I'm used to it. I don't think about it.
But at nearly the last moment, I realised that blithely encouraging the poor chap to charge off into the darkness was... possibly... not the smartest thing I've ever done. So I sent him some more emails. But I think they were a bit scary. He probably thinks I'm mad by now. And I'm sure that the phone calls yesterday and the day before didn't help. Natalie didn't know who he was on the phone... and then when he DID get hold of me, I'd already started in on the liquid part of the Christmas luncheon.
I think I was coherent, though. Anyway, here's hoping that Beeso &co have now landed safely, and are enjoying the southern end of the state. I'll lay in a few bits and pieces, and when they do reach this corner of the place, we'll try to treat them properly...
Anyway. Christmas luncheon went well. Baked ham, potato salad, and a rather nice raspberry clafoutis with whipped cream. Steve the Bike Guy (the Chocolate Fairy's friend, up there in the first photo) was particularly enthusiastic about the clafoutis, and I'm now under instruction to telephone him any time I happen to be making one. I'm prepared to do that, but I think he'll probably be disappointed. I'm not allowed to make desserts very often.
Still. It really was damned good.
We ate. We drank. We played board games and drank. At some point, Amazing Neighbour Anna turned up and borrowed the Mau-Mau for a few hours. We continued to drink, eat and play games. Eventually the Mau-Mau was returned to us.
Then the visitors trundled off home, and children were folded away, and Christmas was declared over. Except for lingering drunkenness, of course. Bleah.
Posted by Flinthart at 5:57 PM