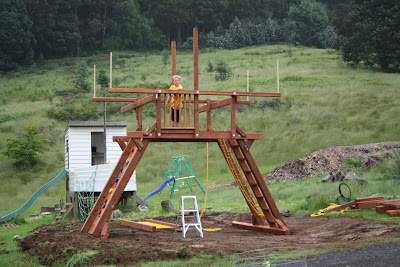 The weather was not so kind today, no. Mist, drizzle, and then eventually rain. Nevertheless, local superhero Bobcat-Man turned up on time with his amazing earthmoving powers. The site was levelled in no time at all, and then, in a single breathtaking swoop, he used a couple of hardwood two-by-fours to convert the bobcat bucket into a makeshift forklift, and saved my aching muscles an hour or more of ugly work by simply picking up the entire arch and depositing it gently, neatly in position.
He went on to rip out a lot of old fence posts and wire, and followed it up with a determined entrenchment operation (so I can put some polypipe underground, away from sun, vehicles, bushfires and falling trees) which ended only when he was defeated by the villainous Bearing Failure Man. Although Bearing Failure Man escaped, I'm sure that Bobcat Man will meet him again someday, and emerge triumphant. In the meantime... thanks for the rescue, Bobcat Man!
Weather being what it was, I didn't get as much of the superstructure in place as I would have liked. I did seed the newly levelled area with grass, though. And of course, got in the daily shopping, collected kids from school, and ran up a nice risotto for dinner as well as put a few loads of laundry through the system. Oh - found a nifty present for the Mau-Mau while I was collecting the post, and something for Natalie as well, yep.
To round it off, Jake had to stand up at the school's Awards day today and accept an 'Academic Achievement' award for his class/age. He's pleased with himself, which is lovely. Report cards came in as well: all three of the kids doing very nicely, thanks, despite taking a significant chunk of the last term to go to Borneo, etc.
I doubt Younger Son will ever top the grades the way Jake does, but there's no mistaking his intelligence. He's a lot more hands-on and visio-spatial. He got in there today, handling a socket spanner and saving Nat and I a lot of fiddly, minor work. He's never happier than when he's building something, or taking something apart and figuring out how it works.
Hope I can get this stupid great swingset completed in time for his birthday party on Sunday!
Posted by Flinthart at 1:57 AM