What I Have Been Doing 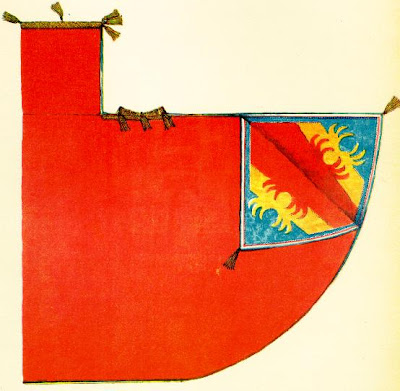 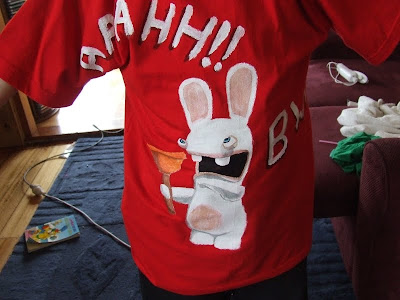 One 'Rabbid' shirt for Barnes #2. Hopefully he'll enjoy it. Yes, that's a toilet plunger in the hand of the cartoon character. 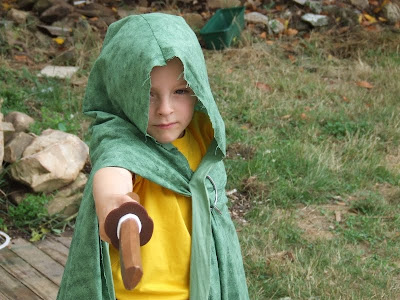 'Mouse Guard' -- Younger Son is utterly captivated by his newly created cloak. Gonna have to fix the edges so they don't fray, but other than that, the thing is done. 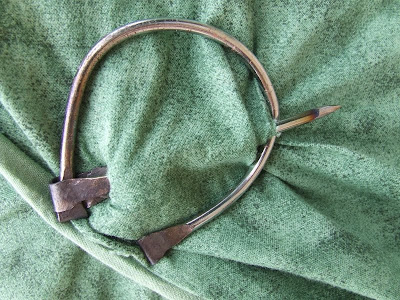 Penannular broach/cloak pin. I've never tried messing around blacksmithing before. That was a whole heap of fun, and the thing actually works properly. Cool! 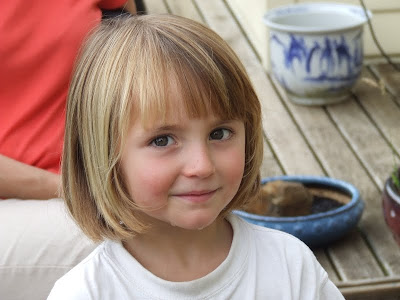 The Mau-Mau Has A Shiny New Haircut.
School holidays persist in Tas a little longer than elsewhere. I have, therefore, been Doing Stuff With My Kids. Among other things.
Essentially, I've taken a step back from the usual writing duties, so I'm well behind on things. (Got a couple stories to finish, and a novel. And another novel. Yeah. Plus... ummm... one, two, three book reviews. And a game review. And a combined comparative review of Dune as novel, movie and miniseries. Oh, and a lot of reading and assessment and editing too. But I'll get there.) But in the meantime, I've taken a bit of time to hang around with the kids. We've played video games and board games, gone walking and berrypicking, messed around in the garden, and done some creative stuff too.
The photos above are a testament to some of that. The red shirt with the bizarre cartoon rabbit on it -- that's a gift to Mr Barnes' offspring. The character comes from a series of Wii games much favoured by my own children as well as Spawn of Barnes, and in thanks for the help that Barnes # 2 (as opposed to Barnes #1, right, Mr B?) I got out a bunch of fabric paints and did a bit of cartoonery. And of course, that was a bit of a cue for the kids. Elder Son has created a complicated cartoon shirt of his own, as a gift for his mum on her birthday.
Then there's Younger Son in the cloak. See, not long ago I discovered the 'Mouse Guard' comics. I'm a sucker for good comics, and the art in the Mouse Guard series is very fine. The stories aren't bad either. So I ordered a couple of the books -- for the boys, y' understand -- and got a deal on the rules to the role-playing game too, which was a bonus.
The books arrived, and Younger Son absolutely devoured them. When I told him we had game rules, he nearly exploded with delight and impatience. The first thing he wanted to know: "Can we dress up like Mouse Guards?"
Well... I guess so. Yep.
So. We got some nice green cloth that was going cheap. And I noodled around on the 'net until I found the simplest damned cloak pattern available -- it's that red thing up there, the 'Moroccan Burnoose'. There's an absolute minimum of sewing involved. If you plan and cut thoughtfully, the only actual sewing is the seam at the top of the hood. Of course, as you can see from the photos of Younger Son, I'll have to reinforce the edges to prevent fraying, but that won't take long. At least, it won't once I have a sewing machine. Must buy a cheap one tomorrow.
Anyhow, having cut and stitched the basic cloak, Younger Son was beyond delighted. He's wearing it everywhere. Stalking around the house in it. Creeping around outside, swishing the thing back and forth, pulling the hood low over his eyes, springing out with his wooden sword... completely happy.
But we both decided it needed a pin or a broach to close it, and the Mouse Guard illustrations show that his hero-mouse (named Saxon) has a cloak with a classic penannular broach. Well -- I figured that couldn't be too hard. So I got a cheap-ass paper towel rack from the local cheap-shit store, and I cut the appropriate lengths of metal rod therefrom. And I grabbed a hammer, and a big old chunk of cast iron to act as an anvil, and a butane blowtorch, and I went to work.
I admit: it's not a work of art. But it is, after all, my very first penannular broach. It does in fact do the job keeping the cloak in place, and it actually looks the part. The steel is a bit uninteresting, though, so I picked up some copper sulphate from the hardware store. Sometime in the next few days we'll set up a copper sulphate bath, connect a 12v battery recharger through it, slap the cloak pin on the proper electrode, and the boys will get a quick-and-dirty lesson in basic electrochemistry while the pin turns from roughly hammered steel to interesting, weathered copper.
Meanwhile: tomorrow my dad and my step-mum arrive from Far North Queensland. They're here for a couple weeks, which will be nice. But of course, that's precipitated some action around the place. I've had to stop the slashing of the paddocks -- had to stop anyway, because we had some serious rain and the hills are currently too slippery for safe use of the tractor -- so we've just picked up a decent secondhand queen-size bed. And today, I carried the foldaway couch/bed down out of the guest room, and with a bit of an assist, I heaved the thing up into the loft/cinema. That's a good mix: it will make a great movie couch, and will act as an extra spare bed in times of Many Visitors.
Meanwhile, I've hauled the queensize mattress upstairs to the guest room, which is currently being cleaned within an inch of its life. Once all that's done, I'll assemble the bed, load the mattress, and put all the fixin's in place. Thus will the Oldies be rendered comfortable for the duration of their stay -- and equally, future visitors will no longer battle the adequate-but-stern foldaway couch.
These are the kinds of things I've been doing. So no: I haven't been online a whole lot. Never mind. That'll change, especially as nights get longer and days gradually get colder...
Posted by Flinthart at 6:55 PM