Nice day yesterday. I've pretty much got this computer jumping through the hoops I want now. Solved a minor boot-priority problem (who knew that an external USB backup drive would demand first place on the boot-priority list? Not me! Still, it means I can probably set up a simple Linux system on a thumb-drive, add the capacity to read NTFS and FAT32 to it, and use it as a troubleshooter if I have to. That's encouraging); set up the old computer for the boys to use -- still have to put the printer drivers on it, but that's no big deal.
The day was sunny and lovely. We've had a bit of recent rain, but it's drying out again, so the boys and I decided it was time to go on an Expedition. We put on our best explorer garb (and I've even managed to find a pith helmet to go with the solar topee purchased at Christmas) gathered our survival gear, and went down to the bottom of the property, near the spring.
Y'see, the spring rises from a gully, and there the trees and the near-rainforest starts. And I think that our spring eventually becomes a small creek which runs into the Brid river near the start of a local dirt road -- so I thought we could try forging along the banks of the creek through the trees until we came to paddockland once more.
I was, of course, quite wrong.
The gully has been logged and cleared before. That's obvious by the fact that pretty much everything growing down there (tree-wise) is wattle, which means regrowth. I did find a few little myrtles down there, near the creek itself, but they were in bad shape. I think the last few years of low rainfall have put the zap on them.
Anyway, despite past clearings, the regrowth has gone ahead in a big way. The creek bed itself is unnavigable -- it's not so much a creek as a permanent bog in the bottom of a ravine. Lots of squelching, fears of leeches, and a maze of fallen logs and tree-ferns to negotiate. Hard going. We eventually scrambled up the bank, and followed the side of the creek through the trees, but it was still tortuous stuff, with lots of clambering and struggling and backtracking to find a clearway...
... eventually we ran out of time. The boys had become a bit nervous about getting lost (and of course, one wonders how we were supposed to manage that!) and we definitely had to get back in time for Natalie to go off to music, so I struck out uphill, towards the main highway. Eventually we found a marker post for the underground phone cable, and since I knew the cable led back onto our property, we followed the general direction of the arrow on the little sign, and came out at the bottom of our place once again.
The boys were utterly delighted by the whole event. It counted as a 'proper adventure', apparently. We took photographs, and made notes on a map, and next time, we'll even keep a video log. Apparently.
Finished up the day with hand-made pizzas and an Iron Man cartoon movie while Natalie went off to music. Oh, and while I'm at it: here's a really good use for leftover pizza dough --

Home Made Pretzels
These are the big, salty, bready kind, not the small crunchy kind. But they're really, really good. What you do is make a standard pizza dough, and once you've made your pizzas, you take the leftover dough and put it to use as follows -- start a small pot of water boiling. Put some baking paper on a cookie sheet. Prepare a glaze of egg and a little milk. Set your oven to 220C (2oo for fan-forced). Break off a golf-ball sized chunk of dough, and roll it between your palms until it's about 30cm long. (That's a foot in the old measure.) Tie it into the familiar pretzel shape, and drop it into the boiling water. While it's in there, start making another one. By the time you've rolled and tied your second pretzel, the first will have floated to the top of the water. Remove it with a slotted spoon, and put it on the baking paper. Put the second pretzel in the water, and continue as before. When you run out of dough, glaze the pretzels on the baking paper with the egg-mix, and sprinkle them with some salt flakes. You can add poppy seeds or sesame seeds, but these are seriously non-canonical. Finally, bake your pretzels for about 20 minutes, or until they turn golden brown. Enjoy them hot, fresh from the oven -- or let them cool, and put them into your kids' school lunches, where they will be enjoyed tremendously.

And now, some photographs... 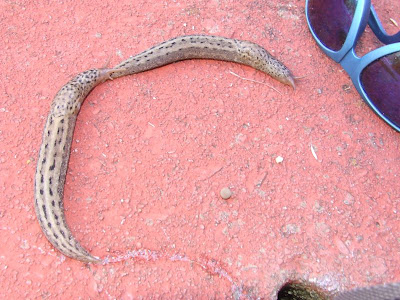 Yes. Those are slugs. And yes, in the right upper corner you can see a pair of sunglasses. I've never seen slugs this size or colour in Australia before. Must pass this photo on to friends at the museum... 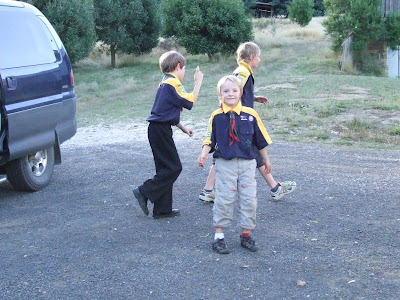 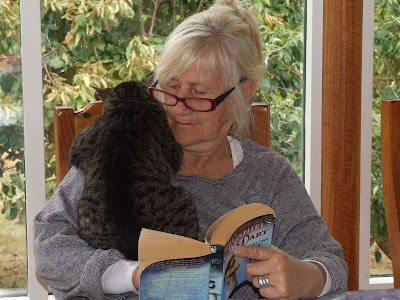 Toxo The Cat loved the visit from Grandma Rose. Wouldn't take 'no' for an answer. 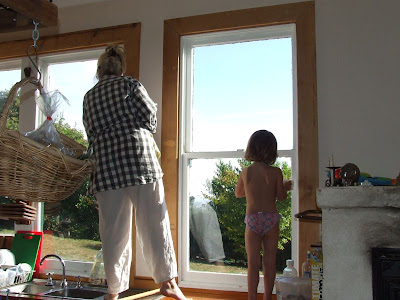 Grandparents are incorrigible. Here's Rose cleaning the kitchen windows, with help from the Mau-Mau. 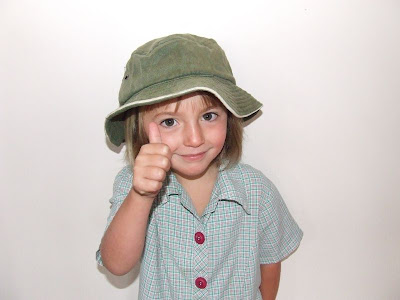 The Mau-Mau, off to her first day at school. She thinks the uniform is the Best Thing Evar! 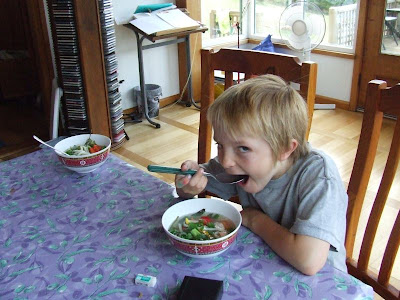 Younger Son's foray into Thai Fish Stew was a success. 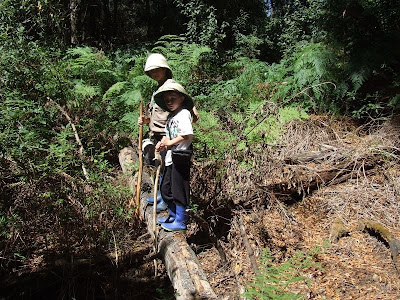 On Expedition: this is about forty metres downhill from our spring 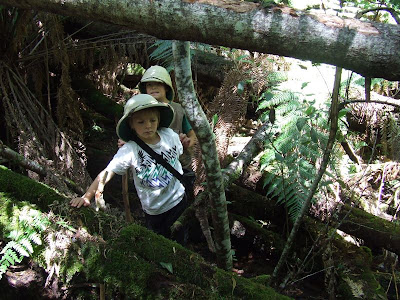 And this is probably a hundred metres or so downhill from the spring. You can see why we wound up climbing out of the creek bed. I totally love the headgear the boys are wearing, though. We were The Compleat Expeditioners, I tell you...

Posted by Flinthart at 1:39 PM