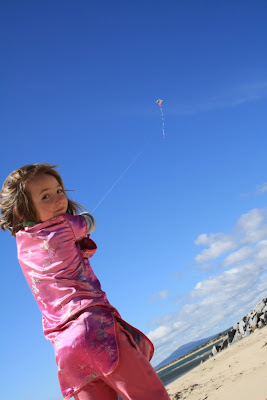 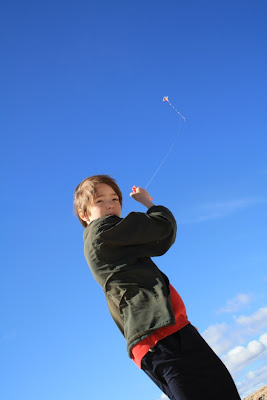 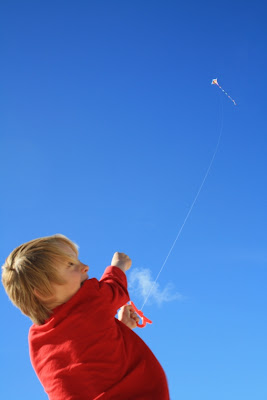 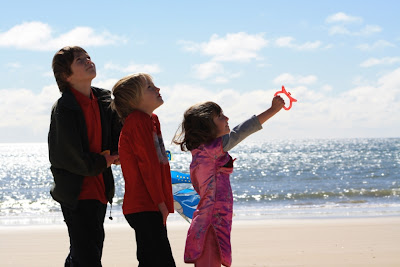 We spent a couple of hours watching the kite, and beachcombing. Then we took in a toasty-sandwich lunch at a local cafe and headed back.
Unfortunately, on the way back I began to develop my version of a migraine headache. I get a sharp pain about five centimetres back in the skull, behind one of my eyes. (It was the right, yesterday.)
It's a strange thing. The pain doesn't really seem that bad to me, but for some reason, I can't ignore it, and if I don't do something about it, it kind of takes over my entire perception of the world, and I get knocked flat.
I took a couple paracetamol and a couple ibuprofen. That's usually enough, if I get to it in time. Unfortunately, after an hour or so, things were worse. I had to put the kids on autopilot ("Godzilla movie, anybody?") and lay down in a darkened room.
Things didn't improve. The kids were great, but I was drifting in and out of a horrid, fitful sleep, and the pain behind my eye was like a clenched fist. Luckily, Natalie came home a bit early. I ran a bath and climbed in (I don't know why it helps, but it does) and she gave me some aspirin as well. I lay there in the bath for about an hour, and the tide of pain receded until I could more or less function again, but I was washed out - empty, exhausted.
Migraines are weird. I know that most people who get them are far worse off than me, though. Both my parents used to get them, and could be bedridden for forty-eight hours or more.
Anyway: Natalie made dinner. Luckily, I had made soup stock the previous day, and laid in a supply of vegetables, and we still had leftover chicken pieces. Took a lot of pressure off when I needed it.
The aftereffects of the migraine passed by about seven o'clock, which was handy. I went on to bake a chocolate cake (somebody's birthday today; not kids, but a friend) and to make a big batch of peppermint pillow candy (the birthday friend really, really likes peppermint.)
Today is also fine and sunny. It's still spring, still school holidays. I think the little barstewards need to go outside for a while...
Posted by Flinthart at 3:07 PM