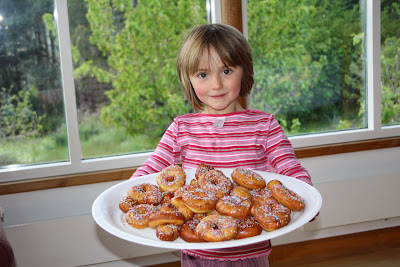 I indulged myself in a bit of a rant a while back; a rant which is likely to turn up in somebody else's blog sooner or later seeing as how I was asked to do it by the delightful and terrifyingly talented Mme Slatter. In said rant, I expounded upon the qualities of the true yeast doughnut, and I spoke disparagingly of the crapulous, battery junk pushed on us in the name of 'doughnut' by a horde of vile purveyors of toxic waste disguised as fast 'food'.
Indeed. And I note with a certain sense of satisfaction that one such purveyor of 'doughnuts' is in deep financial doo-doo here in Australia, which suggests to me that the humble Aussie doughnut-sucker knows a thing or two about dough.
Maybe. Or maybe they just can't eat the damned things fast enough to keep the company in question afloat, seeing as how it originated in the deep south of the US where the doughnut is regarded as one of the essential food groups.
Not that it matters. Because today is Friday, and on Fridays it's me and the Mau-mau, pretty much all day. She stuck out the morning shopping run like a champ. She dealt with the pump-operating part of the day very nicely, even though she knew there might be leeches. (I got leeched down by the spring just last week...) She did her piano practice, and raced the dog up and down the spring-green paddocks for a while. Then she enjoyed her lunch, and took in a Godzilla movie, and finally, I agreed we would cook something together.
She likes her some cooking, does the Mau-mau. 'Specially if it happens to be some sort of sweet.
The end results are visible in the photo above, and I assure you: those are genuine, finest-kind, home-made yeast doughnuts. Twice-risen, hand cut, then fried in peanut oil, and lightly glazed with a mix of milk and icing sugar flavoured with vanilla and cinnamon.
The sprinkles were the Mau-mau's idea. I couldn't convince her to leave 'em off.
Never mind: still the best goddam doughnuts I've had in a looo-ooong time.
Mr Flinthart makes doughnuts as follows:
Ingredients -
1 tb Dry yeast
1/2 c Lukewarm water
1 tsp Sugar
1 lge Egg
1/3 c Sugar
1/2 ts Salt
1/2 c Milk
3 tb butter
3 1/2 c plain flour
Vegetable oil
Preparation
Put your warmish water in a bowl with the yeast and that first teaspoon of sugar. I used brown sugar. I don't suppose it matters. Whisk the mixture and set it aside until it goes all foamy. That tells you the yeast is ready to rock and roll.
Put the milk and butter together in a small saucepan over a low heat, stirring until the butter melts into the milk. Don't boil it. Just melt the butter, and then put the saucepan aside. You want the milk to be no more than pleasant warm to your finger.
Break your egg into a big mixing bowl with your 1/3 cup of sugar, and that sprinkling of salt. Beat the crap out of it with an electric mixer until it's light and thick and fluffy. Now you can beat in the foamy yeasty stuff and the lukewarm milk-and-butter mix.
Put your electro-mixer away and get yourself a wooden spoon. Start gradually beating your flour into the liquid until it becomes a batter too thick for comfortable spoonage. Scrape the spoon into the batter. Put the cleaned spoon in the sink. Get some butter on your hands and prepare to get messy. You have to work the last of that flour in until you have a nice, soft, dough that you will knead for the next five minutes, until it becomes smooth and springy. Now stick the doughball into a buttered bowl. Cover it in plastic, stick it in a warm place, and leave it alone until it doubles in size. (About an hour. Maybe an hour-and-a-half.)
Now: spread out some baking paper. Punch down the dough, and roll it out to a bit less than 1cm in thickness. With an egg-ring (buttered!) cut rounds out of the dough. To cut the centres, you will have to improvise. Or just poke a hole with your finger and stretch your doughnut to shape.
Take all the scraps, reroll'em, and cut out more doughnuts. Keep going until you've got about twenty or so. Take the remaining scraps, and roll 'em into a long snaky tuby thing about 2cm thick. With greased scissors, cut the tube into 2cm lengths. Put all your doughnuts and your doughblobs aside on baking paper to rise for the next hour or so - or until they roughly double in size again.
Get a decent saucepan. Put about 8-10cm of clean vegetable oil in it. Make it hot. Very hot. Grab one of your little dough-blobs and put it in the oil. When it starts to bubble and float, the oil is hot enough. Start frying your doughnuts.
When you drop 'em in the oil, they'll bubble, and rapidly float. Fry them in batches of three (more of the bloblets, obviously!) Turn them once as needed, so both sides go that wonderful golden brown colour. Drain them on paper towels or butcher's paper or newspaper or whatever you like.
While they're cooling, mix a tablespoon of cinnamon powder with a cup and a half of castor sugar, in a sturdy plastic bag. Once the doughnuts are cool enough to handle (but still warm, dammit!) put three or four at a time in your bag, and shake like hell, thus giving your doughnuts the perfect sweet, crunchy-cinnamon coating.
(Or you can just glaze the damned things and cover 'em with sprinkles if you're cooking with your bolshy five-year-old daughter who loves sprinkles as though they are the very Fountain of Youth and Life...)
Posted by Flinthart at 1:46 AM