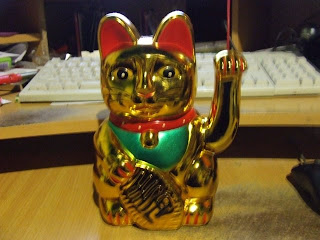 Ahem. First I'd like to thank Mr Barnes most sincerely. His kind gift of a starter-pack from Monster Apocalypse has now provided Elder Son and I with a sort of giant robot Mecha-type monster with which we can battle our Lords of Cthul and our World Eaters. It's nice to have something that passes for a good-guy in our battles.

And now that I've passed on that thanks, I'd like to take this opportunity to call Mr Barnes a twisted, deviant bastard because of his other gift. Which is depicted in the photo above.

That... remarkable item... is - well, it's a stylised cat, made of finest metallic-gold anodized plastic. If you're fucking stupid enough to put two AA batteries up its arse, that raised paw there on the right of the image will wave. Forward and back. For a very, very long time.

The Mau-Mau loves it, of course, so I can't legitimately take it outside and use it for target practice. Which means that the only thing I can do is find something equally charming to offer Mr Barnes in reply. Perhaps one of those vibrators shaped like Barack Obama? I don't know... I'll have to think about it. 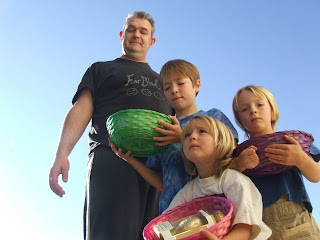 And that there would be a shot of Big Bob and the Mini Flintharts on a perfect Tasmanian autumn morning, shortly after some determined sleuthing recovered the Easter goodies stolen by that bastard bunny. The bunny apparently sneaked into the cupboard where I'd been storing the baskets, and left a rather gloating note to the effect that he'd stolen their Easter choccies, and he was gonna start snacking on them unless they followed his clues.

The clues were a string of off-beat photographs of places around the house, as I mentioned before. Each photo led to the next, until the final revelation. The kids were jumping out of their skin with excitement, puzzling out each new photo as it appeared. A very close-up shot of the piano keyboard (showing two white and two black keys) fooled them for a while, and the brass doorknob had them stumped briefly, but most of them they figured out quite quickly. It was great fun to watch them charging in and out of the house, waving photographs, calling out the next clue, stampeding from location to location... 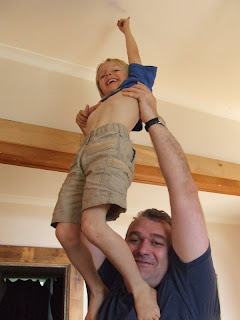 That would be the Younger Son, hoisted to the ceiling by Guru Bob. Smaller Son was deeelighted by the whole visit. I'm sure if he had his way, we'd have to adopt both Bob and Miz E as permanent household features. 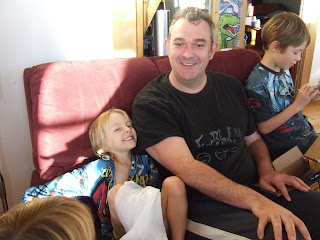 Finally, Guru Bob in the grotesquely early morning on the Maroon Couch of Aggressively Cheerful Easter Chocolate Enhanced Children. If the wine wasn't enough to deliver a hangover, I'm sure the relentless energy and noise must have done the job. Sure as hell messed with my head, anyhow.

Glad you could make it by, Roberto -- and you too, Miz E. Don't take so damned long to schedule the next visit, eh?
Posted by Flinthart at 3:22 AM